As part of an official press release that was issued on Thursday morning, the Cavs announced their schedule for the 2019-20 NBA Preseason.

According to the team’s report, the Cavs will play a total of four preseason games — two of which will be held inside the recently-renovated Rocket Mortgage Fieldhouse.

The Cleveland Cavaliers announced today that the team will prepare for the 2019-20 Regular Season with four preseason games, beginning on Oct. 7 and concluding on Oct. 15. The slate of games will feature two home contests at the newly transformed Rocket Mortgage FieldHouse on Mon., Oct. 7 versus San Lorenzo de Almagro of Argentina’s Liga Nacional de Básquet (LNB) and Tues., Oct. 15 versus the Boston Celtics. The team will hit the road for two away contests on Fri., Oct. 11 against the Detroit Pistons at Little Caesars Arena and Sun., Oct. 13 against the Boston Celtics at TD Garden.

The Cavs were relatively quiet on the free agent market this summer, but that doesn’t mean the team hasn’t improved. Cleveland acquired several talented players in the draft, including No. 5 overall pick Darius Garland, Dylan Windler, Dean Wade and Kevin Porter Jr.

Cleveland will have a new play-caller in the coming season as well, as John Beilein has joined the team after 12 successful years at the University of Michigan. The 66-year-old is viewed as one of the greatest coaches in collegiate history, and now he’ll try his hand in the NBA.

Beilein has left a trail of success throughout his career. In fact, he’s the only active collegiate coach to have achieved 20-win seasons at four different levels; junior college, NCAA Division III, NCAA Division II, and NCAA Division I. He’s also one of only six Division I coaches with 700 or more career wins.

Along with Beilein, the Cavs hired Lindsay Gottlieb as an assistant coach. The 41-year-old New York native was previously serving as the head coach of the women’s team at Cal. In just her second season with the Golden Bears, she led the team to its first Final Four in school history, their first Pac-12 Conference championship, and the most wins ever by a Cal women’s basketball team (32-4).

Fans can catch all of the Cavs’ preseason action on FOX Sports Ohio and the team’s flagship radio stations: WTAM 1100 AM and La Mega 87.7 FM. 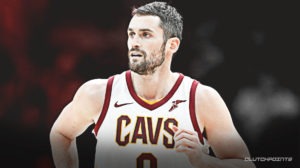