Cleveland Cavaliers: ‘The Other Cavs’ 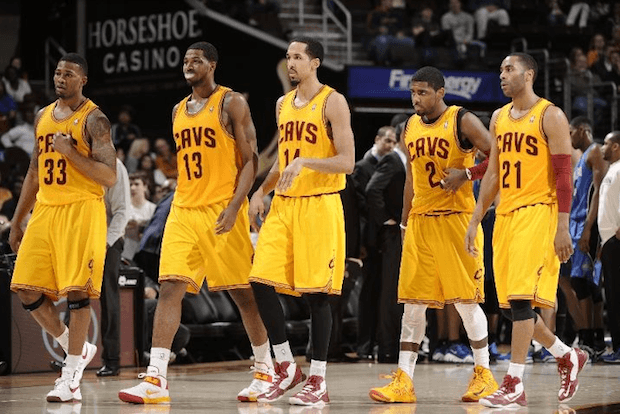 We all know the impact of having LeBron James on your team and what he is capable of doing. Your team will make the playoffs with a top-4 seed and are expected to legitimately compete for a championship. In the past 8 years, whether in Cleveland or Miami, that is what LeBron James-led teams have done.

In the 2007 NBA Finals, against the San Antonio Spurs, LeBron James averaged 22 PPG but struggled shooting at a well below-average 35%. The Cavaliers needed someone else to step up, but with their next best players having been Drew Gooden (12.8 PPG, 50% FG), Daniel Gibson (10.8 PPG, 44% FG), and Sasha Pavlovic (9.8 PPG, 36% FG) respectively, it would prove far too difficult to defeat a Tim Duncan, Tony Parker, and Manu Ginoblil led team.

Fast forward to the Cleveland Cavaliers in 2009, where before LeBron James bolted for Miami, the Cavaliers had assembled what seemed to be a championship team. At least, that’s what it looked like on paper. In the conference semifinal series against the Celtics, the LeBron James’ supporting cast contributed more than that of 2007 with Shaquille O’Neal, Mo Williams, and Antawn Jamison, who was acquired mid-season from Washington. However, in the end, Boston’s defense was too much to overcome as the Cavaliers were once again sent home before reaching the Finals.

Now after 4 grueling seasons and with the 2014-2015 season just months away, the Cavaliers are once again contenders as LeBron James has not only returned but also has the supporting cast of a young and talented roster that the city of Cleveland has not been able to witness in a long time. Having three number 1 overall picks in the NBA Draft in 4 years may not have had an immediate impact, but this is the season where things are expected to change.

“I’m not promising a championship. I know how hard that is to deliver. We’re not ready right now. No way,” says James in his Sports Illustrated letter announcing his return to Cleveland. “I’m going into a situation with a young team and a new coach. I will be the old head. I think I can help Kyrie Irving become one of the best point guards in our league. I think I can help elevate Tristan Thompson and Dion Waiters. And I can’t wait to reunite with Anderson Varejao, one of my favorite teammates.”

A revamped Kyrie Irving, having just committed 5 more years to Cleveland and acquired the help he so desperately desired, is looking to finally make a push for the playoffs. This is something he hasn’t been close to since his arrival to the NBA as the first pick in 2011. Kyrie Irving is already an all-star MVP, so showcasing his offensive skills and co-existing with new teammate LeBron James should not be an issue. That’s not to say there won’t be a transition period, but it’s something they’re both looking forward to.

The newest number 1 overall pick, Andrew Wiggins, is a great addition to this already young Cavaliers team despite all the trade rumors. He displayed his footwork, athleticism, and the type of game the Cavaliers are going to need if they want to make a championship push for the coming years. His numbers weren’t flashy, but as a rookie his aggressiveness and ability to create for himself showed signs of things to come. On the defensive end, however, is where the Cavaliers will need him. He has a promising offensive game and defensive prowess, but having LeBron James as his teammate and mentor will help his transition into the NBA become much easier.

Although everyone on this team (not named LeBron) really has something to prove, Anthony Bennett, Tristan Thompson, and Dion Waiters may be the ones with the most to prove.

After a disappointing first season, Anthony Bennett is looking to prove doubters wrong and to show fans as well as management that drafting him at number 1 last year was not a mistake. With the way he has looked and played at Summer League in Las Vegas, he’s on the right track. Bennett came in more fit having seemingly lost weight, and with the loss comes the improvement of his game. Once he figures out how to use his newfound athleticism and combine it with his solid game, he should be a force on this Cavaliers team.

{adinserter 2} Tristan Thompson has developed into a solid low post option, but still needs to put in work to become the somewhat dominant defensive presence the Cavaliers need in the paint alongside Anderson Varejao. Originally a left-handed player, Thompson changed his game a lot last offseason and is now a fully right-handed player, which gives him a more ambidextrous advantage over the competition. He should get a lot of easier opportunities around the basket in the upcoming season with James and an improved Irving, but his defense will be a big part of the Cavaliers’ success.

Dion Waiters, a solid player at Syracuse, has yet to develop into the shooting guard with a consistent overall game the Cavaliers want him to be. He has shown glimpses in the past of how good he can be, but often follows those games up with no-shows in both the box score and his effect on the game. Hope is not lost, but Waiters has got to start showing signs of improvement and ability to impact the game on both ends of the floor.

The Cleveland Cavaliers have what it takes to make a big championship run for many years to come. LeBron James has shown he is capable of leading a team to the promised land, but in the present NBA he will need help from the other guys on the team. The solid players the Cavaliers have drafted over the past couple years will help LeBron put them over the top, but it won’t come all at once. They all have a lot of work to put in before they’re ready for a championship run, but this team is on the verge of success.