When the season starts in late October, there aren’t many NBA teams that look forward to December or January. Most teams, the contending teams, are marking their calendars for April, the best ones circle June. Although not all teams make it past April when the NBA playoffs begin, there are only a handful of teams who are really going to be able to compete for a championship in June. When your team has the best basketball player in the world, you become one of those teams.

Within an hour of LeBron James announcing his decision to return to his home state of Ohio to play forthe Cleveland Cavaliers, his team became the favorites to win the NBA Championship in the 2014-15 season. That’s the result of having the best player in the world on your team. According to USA Today,the Cavaliers were established as 4/1 favorites to win the title next season, ahead of the reigning NBA champion San Antonio Spurs (5/1) and the Oklahoma City Thunder (6/1). Just as the offseason started, Cleveland had distant 60/1 odds of winning the NBA championship, but as the rumors revolving LeBron James leaned towards him making a return to Cleveland, those odds increased and increased until decision day.

So following an incredibly talented NBA draft and plenty of offseason moves around the league, what are the Cleveland Cavaliers’ chances of winning an NBA Championship in the 2014-15 season? Here’s what the Cavaliers will be rolling out so far next season: 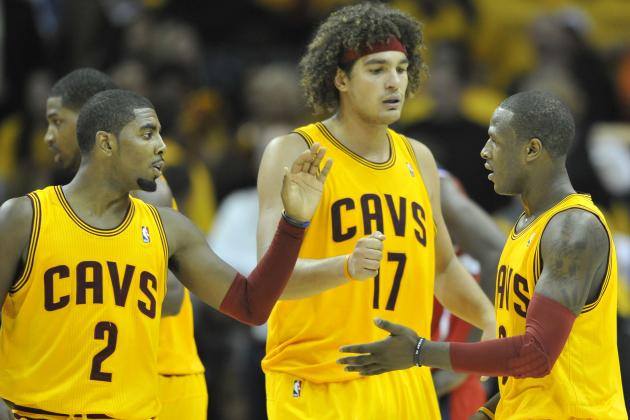 Cavs fans definitely have something to be excited about, and it seems that the offensive end will be the least of their worries. We all know the overall production abilities of James, Irving, Wiggins, and Thompson. The reliable shooting, experience, and hustle of Mike Miller, James Jones and Anderson Varejao will greatly ease the transition to being a great team. Hopefully, Anthony Bennett and Dion Waiters have made improvements to their game to make them more formidable.

Championships however, are won on the defensive end, a place the Cavaliers have been disappointing time and time again over the past couple seasons. Next to LeBron James, new head coach David Blatt is determined to revive the Cavalier defense and will have to if they intend to compete for a championship. James knows what it takes to win championships defensively after 4 very successful yearsin Miami. Blatt has multiple Euroleague championships and Olympic experience on his resumé.

The Cavaliers will have their work cut out for them after teams like the Bulls, Heat, and Wizards madesome of the best moves this offseason.

{adinserter 2} The Chicago Bulls, who were always contenders with Derrick Rose on the floor, now have their all star and MVP back in uniform looking to prove he’s still got the athleticism to lead his team deep in the playoffs to the Finals. The Bulls may now have the most formidable frontcourt in the entire NBA. After a successful draft and free agency period so far, Chicago will likely start Pau Gasol alongside Joakim Noah, both incredibly great passing big men, with defensive stalwart Taj Gibson coming off the bench. If that wasn’t enough, they drafted the highly praised European forward Nikola Mirotic. No one can really tellhow good Mirotic will be, but Chicago is already looking like they will be a top-2 team in the East. Their half-court defense will make it hard for the Cavaliers as well as other teams to get by them, Cleveland’s defense will have to lead up to their offense. Gasol vastly boosts the Bulls offense but has reached the age where his defense is lacking. Gibson’s low post and help defense is tremendous, but there’s the offensive side of the ball where he is yet to be a force who can create for himself. Getting stops andmaking the Bulls work on the offensive end will be the key to the Cavaliers’ success.

The Miami Heat have brought back or signed numerous big names this offseason. Dwyane Wade, Chris Bosh, Chris Andersen, Mario Chalmers, and Udonis Haslem have all returned. They recovered from the departure of LeBron James quickly, signing forwards Danny Granger, Josh McRoberts, Luol Deng, and James Ennis while drafting NCAA champion point guard Shabazz Napier. Needless to say, the Heat look poised to stay on top of the East and compete for another championship. They are the reigning Eastern Conference championships and will be until they are dethroned, so to speak. Cleveland will have their work cut out for them when they go up against Miami, but team defense and ball movement will put the Cavs in a good position to take down the reigning Eastern Conference champs.

The up and coming Washington Wizards took care of the offensively-challenged Bulls before clashing with the Pacers, eventually being eliminated in 6 games. John Wall and Bradley Beal, trying out for team USA, are stars on the rise. The resigning of Andre Miller, Marcin Gortat, and Drew Gooden gives them the veteran stability every contending team needs. Their biggest move may be the signing of Paul Pierce, a Cavaliers and LeBron James rival since 2008. The Wizards are on the brink of success thanks to the moves they’ve been able to make and their recent playoff experience will only aid in their attempt to make some noise in the East. The Cavaliers’ lack of playoff experience (save for James, Miller, Jones,Varejao) could factor against them in any series, so taking advantage of any offensive struggles and easy opportunities will be important against the Wizards.

Making it to the playoffs takes an extensive 82-game season, but the playoffs are a whole different ball game as pressure to execute intensifies. The Cavaliers and their fans want and expect a big playoff run this season, with good reason. The Cavaliers, among the east’s elite teams, have a good chance of winning a championship this season. Whether it may be Chicago, Miami, or Washington, the Cavs ability to go deep into the playoffs depends on their progress as a team offensively and especially defensively.