Since the NBA regular season schedule has been released, fans can now pencil in some must-watch games for their favorite teams. While the Cleveland Cavaliers might not be predicted to win many games (24.5 is the over/under on most betting sites), they are still sure to have some great games that will keep Cavs fans entertained while the team rebuilds itself into a playoff contender.

Let’s take a look at some of Cleveland’s most intriguing games for the 2019-20 season.

Sure, neither of these teams are going to blow anyone away with their star power. Between the two rosters, there is a total of two former All-Stars. Kevin Love will be the last one standing if the Grizzlies trade Andre Iguodala before the season starts, which is a likely possibility.

While they might not have any proven stars, the two teams have plenty of rising ones. The backcourt matchup will be excellent, with fifth overall pick Darius Garland matching up against second overall pick Ja Morant. As an added bonus for Cleveland fans, this will be one of the few times all year where the Cavaliers should be favorites.

This one is another matchup with some great guard play. Hawks point guard Trae Young will be on a mission all year to lead his team to a playoff spot, and possibly receive an All-Star nod on the way. This should be a game with plenty of fireworks, considering neither Young nor Garland are known for their defensive ability but can score at will. Expect a ton of three-pointers and a game score that will probably end with 240 combined points.

If you’re a Cleveland fan and feeling particularly lucky, this might be the game that turns your ten dollars into a large chunk of money. The Cavaliers are guaranteed to be massive underdogs when Giannis Antentokounmpo and the Bucks come into town, but crazier things have happened in the NBA.

This might be a blowout, but getting the chance to watch the Greek Freak and company come to town is too big of an opportunity to pass up. Additionally, the Cavs will get a chance to use the game as a measuring stick to see just how far away they are from the elite Eastern Conference teams.

Here’s another matchup between teams that have yet to break through but are gearing up with promising rookies. Zion Williamson will already be a few months into his professional career, and presumably the front runner for Rookie of the Year.

Even assuming that Williamson takes the league by storm, there is no guarantee that the Pelicans will be a playoff team. That means that this could be a close matchup against one of the most exciting teams in the league, and a chance for the Cavaliers to get a statement win.

The one time a year when LeBron James returns home is obviously a must-see. The fact the Lakers are expected to be serious championship contenders just sweetens the pot. This is another game where the Cavaliers will be looking for a major upset, but Cavs fans will likely be happy just to see a hometown legend return home. James should get a hearty cheer and then some ragging as the Cavs attempt to shut down one of the best players in the league. 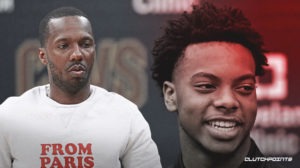 JUST IN: Cavs’ Darius Garland says his agent Rich Paul has ‘target on his back’ amid NCAA controversy
Related TopicsCavaliers