As the days approach the biggest game of preseason this weekend in Brazil between the Cleveland Cavaliers and the Miami Heat, there has been the inevitable apprehension and political statements we’d all expect. In a recent interview, Bosh spoke with Bleacher Report, saying, “Yeah, it’s a lot more difficult taking a step back, because you’re used to doing something a certain way and getting looks a certain way. And then it’s like, well, no, for the benefit of the team, you have to get it over there.”

For the past couple of years, Kevin Love was the first go-to option on his team while Chris Bosh was the 2nd or 3rd, depending on Dwyane Wade’s health. Bosh learned to thrive off the ball and find his spots on the floor to become very effective. But that doesn’t mean he didn’t have to sacrifice for his team. So how difficult a transition will it be for Love? During the Cavs Media Day interviews, Love was resolute in his plans to do what’s best for the team, saying, “I’d be lying to myself and lying to everybody here if I was telling you I didn’t have to sacrifice. I think it’s going to have to be an effort throughout the entire team to do what’s best for the Cleveland Cavaliers.”

Chris Bosh described the new role you take when going from the number 1 option to the number 2 or 3 as not getting your pick of the buffet:

“You just get your entrée and that’s it. It’s like, wait a minute, I need my appetizer and my dessert and my drink, what are you doing? And my breadbasket. What is going on? I’m hungry! It’s a lot different, but if you can get through it, good things can happen. But it never gets easy.”

Chris Bosh was a force to be reckoned with as he averaged 24 points and 11 rebounds in his final year in Toronto, but did not even make the playoffs, as the Raptors finished in 9th place at 40-42. The following year with the Heat, Bosh averaged just under 19 points and 8 rebounds, but the Heat were 2nd in the East, 3rd overall, and managed to make it to the NBA Finals before losing to Dallas. Although his per game production minimally decreased over the years, the overall success of the Heat was unmatchable as they would make it to 4 straight Finals, winning the middle two. An expected drop in statistics is the result for greater overall success.

{adinserter 2}In his final year in Minnesota, Love averaged 26 points and 12.5 rebounds, but failed to reach the playoffs for the 6th straight time in his career. With championship expectations here in Cleveland, Love’s production is expected to decrease as the team becomes more successful. What will he have to do for that success? Score more points? Grab more rebounds? Dish out more assists? Commit a lot more to the defensive side of the ball? Become more of a playmaker? A player of Kevin Love’s caliber should find a way to do any of these things.

Also, with a coach in David Blatt who, although experienced in international basketball, is brand new to the NBA game let alone new to having the firepower he has. It could be really easy for them to get accustomed to the change of not having the ball in your hands as much, or it could be quite difficult as James, Irving, Love, and Waiters will have to work long and hard to find the options and positions that work best for the team.

An important part of transitioning to a team like this is handling the media. LeBron James has learned how to manipulate and navigate around the media in terms of no longer letting them affect his play or mindset. That might be helpful when the media begins asking Kyrie Irving and Kevin Love questions about why they changed their old offensive or defensive habits. Bosh explained the media’s part in trying to get players out of the team’s system and more into basketball from a personal standpoint:

Kevin Love’s transition to playing alongside James and Irving may not be as smooth as some fans expect, but it also may not be as difficult as some doubters are guessing it should be. Only time can tell, but with the experienced supporting cast the Cavaliers have, Cavs fans can expect the transition period, no matter how long, to be just that.

In general, it is still very early to tell what roles every player in the Cavaliers starting lineup will take. Other than the obvious ones of Mike Miller and James Jones as shooters and Anderson Varejao/Shawn Marion as rebounding and defensive hustlers, most of the other Cavaliers are still finding their niche. As training camp comes to a close and preseason basketball turns into regular season basketball, the Cavaliers and their fans will have a good idea of who will be doing what.

The Cavs take on the Heat this Saturday in Brazil for both teams’ 2nd preseason contest. We will definitely keep an eye on LeBron’s interaction with Chris Bosh, but it will be interesting to see how Chris Bosh adjusts from playing with LeBron to playing against him and his new forward, Kevin Love. 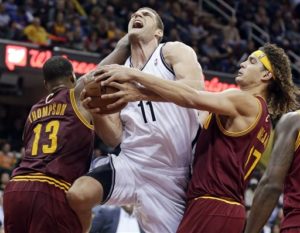