Chosen 2: The Importance Of Anderson Varejao

A plethora of articles have been written about the effects of Lebron James’ return and its impact on the cities of Cleveland and Akron, the Cavaliers organization, and the younger Cavaliers’ players. However, the effect that ‘The Return’ will have on one Cavaliers’ player has been relatively understated. Anderson Varejao himself tempered his personal enthusiasm of teaming up with James again by stating that he was happy for the people of Cleveland when he heard the news of the homecoming. Varejao, a Cavalier mainstay for the last decade, was propelled to incredible highs during Lebron’s first run in Cleveland but then had to endure the disparaging lows that the Cavaliers went through after Lebron departure. In fact, he was the leader on the Cavaliers team that registered a historic 26 game losing streak. No one could be happier that James has decided to return than Varejao. However, it is important to realize that no one is more important to James’ potential success in Cleveland than Varejao.

After being drafted in the second round of the 2004 NBA draft by the Orlando Magic, Varejao was dealt to the Cavs in a cap space clearing deal for the Magic. Prior to the NBA, Varejao had played professionally for six years in Spain and his home country of Brazil and was ready to contribute immediately. Upon arriving in Cleveland, Varejao quickly formed a friendship with James, a budding superstar fresh off his impressive rookie campaign. Varejao adjusted slowly to the NBA game and was a player that other teams and many fans overlooked.

Despite his relative anonymity, Varejao’s hard-nosed play and continual effort and energy on both ends of the floor drew plenty of admiration amongst his teammates. Varejao would always put his body on the line and whenever he was given any playing time, he would do the little things that made him so indispensable. These sacrifices are the reason why Lebron James called Vaejao one of his favorite teammates ever. For the early part of his career, the Cavaliers front court was always crowded with players such as Zydrunas Ilgauskas and Drew Gooden. As Varejao matured, the Cavaliers acquired the likes of Ben Wallace and Shaquille O’Neal; however Varejao always brought great energy to every playing opportunity he received.

After the Charlotte Bobcats signed Varejao to a 2 year, $11 million offer sheet in 2007, the Cavaliers were quick to match that due to the insistence of the players, the most vocal being Lebron. Despite not being a starter, Varejao’s big pay day came after the 2008-09 season when he was given a 6 year, $42.5 million contract. This indicated that Varejao was the long term answer for the Cavaliers at center and would play an integral role in a team that would perennially contend for championships. However, the arrival of Shaquille O’Neal in 2009 relegated Varejao to further back up duties. Staying true to form, Varejao did not complain or sulk but rather continued to do the little things which were so valuable to the Cavs as a team.

{adinserter 2}          It was in his first season without James that Varejao became Cleveland’s starting center. As soon as James left, the rebuilding project in Cleveland was set to begin and Varejao’s name was always thrown up in trade rumours, particularly as his play continued to improve with his expanded role. Varejao has been able to put up double digit point and rebound season averages in two of the last three seasons. However since 2010, Varejao has never been able to stay healthy and play out a full season, in fact he has only played in 44.5% of games since the 2010-11 season. Due to the dearth of quality big men in the NBA, Varejao was a highly sought after commodity despite his injury concerns but the Cavs were never willing to part with him because of the leadership and maturity he provided the young nucleus. Even during Cleveland’s 26 game losing streak and ensuing losing seasons, whenever he played, Varejao displayed the same passion and energy that defined his career. That is why the man who is the heart and soul of the Cleveland Cavaliers desperately deserves a chance to win a championship with the only NBA franchise he has known. Amidst the dysfunction and futility that went on around him for the last 4 seasons, Varejao gave his heart to the Cleveland Cavaliers and the city of Cleveland.

It would be negligent of anyone to dismiss the importance of Varejao now that Lebron has returned. The Cavaliers are blessed with an abundance of quality perimeter players but severely lack rim protection. Even if the Cavaliers obtain Kevin Love, there will be no one who will play significant minutes on the roster who plays above the rim. This is where Varejao’s energy and hustle will be so important, Varejao will need to match up down low with bigger bodied players, prevent opposing guards from finishing at the rim, and be able to contain pick and rolls. Varejao needs to stay healthy for the duration of the season for the Cavaliers to be legitimate championship contenders. Even with Lebron playing extended minutes at the power forward position, Varejao will be the primary (if not sole) rim protector on this team. Varejao and James have come full circle from the two fresh faced kids we witnessed in 2004 on a Cavaliers’ team desperately trying to find an identity to the two leaders of a Cavaliers’ team desperately trying to win its first championship. The ultimate goal of winning a championship was made realistic by Lebron’s return but there is no way that the goal is realised without the help of Lebron’s Brazilian best friend. 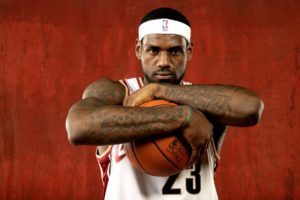