Oklahoma City Thunder guard Russell Westbrook is having a season for the ages, and there’s no denying that what he’s doing is impressive. At 31.9 points, 10.5 rebounds, 10.1 assists, and 1.6 steals per game, Westbrook is doing what no one has done since Oscar Robertson in 1961.

Along with Westbrook, Rockets’ guard James Harden is also having a spectacular season at 28.9 points 7.9 rebounds 11.2 assists and 1.5 steals per game while leading his team to the third best record in the Western Conference.

However, lost in the craziness of Westbrook and Harden’s seasons is the season that Cavs forward LeBron James is having. James is averaging 26 points per game, his highest average points per game since returning to Cleveland. He’s also averaging a career-high in rebounds (at 8.4 per game) and assists (at 8.9 per game) in a season that he’s ‘coasting’ through. His team has a record of 4-19 when he doesn’t play since his return to Northeast Ohio, with the last win coming during the 2015-16 season in a one-point home victory over the Dallas Mavericks.

James has two straight triple-doubles and four triple-doubles in his last seven games, averaging 27.3 points, 13 rebounds, and 9.7 assists since the All-Star break. His teammate, Channing Frye, chimed in on the MVP discussion following Cleveland’s 116-104 victory over the Orlando Magic on Saturday in which James had a triple-double.

“I think he’s underrated, I think people are just bored with greatness,” said Frye following his 12-point performance. “Don’t tell him I said that, but it’s pretty ridiculous. The guy plays three or four positions for us. He’s being unselfish, getting us into our offense, he’s defending very well, he shooting the three solid.”

After four MVP awards in five years from 2009-2013, there’s often talk of voter-fatigue in terms of voting for James. The 2015 NBA Finals in which the Cavs lost 4-2 showed everyone that James likely deserved the Finals MVP award and showed that he was still the best player after almost upsetting a healthy Warriors team without his two All-Stars Kyrie Irving and Kevin Love. Averages of 35.8 points, 13.3 rebounds, 8.8 assists, and 1.3 steals per game made everyone think again about who the real MVP was.

Although Stephen Curry became the first ever unanimous MVP of the league in 2016 and the talk of the league was him passing the King as the best player in the NBA, LeBron James led an incredible comeback from down 3-1 in the Finals with averages of 29.7 points, 11.3 rebounds, 8.9 assists, 2.6 steals, and 2.3 blocks. After leading both teams in all five major statistical categories while bringing a championship to Cleveland, James once again made voters rethink their position on the best player in the NBA.

Frye also took a bit of a jab at Westbrook and other MVP candidates when he said that the triple-doubles don’t matter as much if you’re not winning basketball games.

“They talk about a lot of other guys getting triple doubles, and I think you [have to] look at what he’s doing and how he’s doing it,” added Frye.

“It’s not just one guy scoring,” added Frye. “We had what 10, seven guys in double figures. It’s crazy to get triple doubles like that. We’ll see what happens when Kevin gets back, he might steal a couple boards. As much as he gets attacks, people need to respect what he’s doing for us and helping us win.”

James is among the four players in the running for the Most Valuable Player award this season, including Westbrook, Harden, and San Antonio Spurs’ forward Kawhi Leonard. If the Thunder somehow win 50 games this season, Westbrook is expected to be a lock for the award. Seeing as how that’s unlikely and there’s still over a month of important basketball to be played, the award is still up for grabs.

Without saying it, Channing Frye has already made his vote for the MVP award.

*All quotes transcribed using above video. 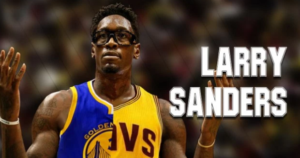 JUST IN: Larry Sanders is on the move to at least leave California
Related TopicsCavaliersChanning FryeLeBron JamesRussell Westbrook