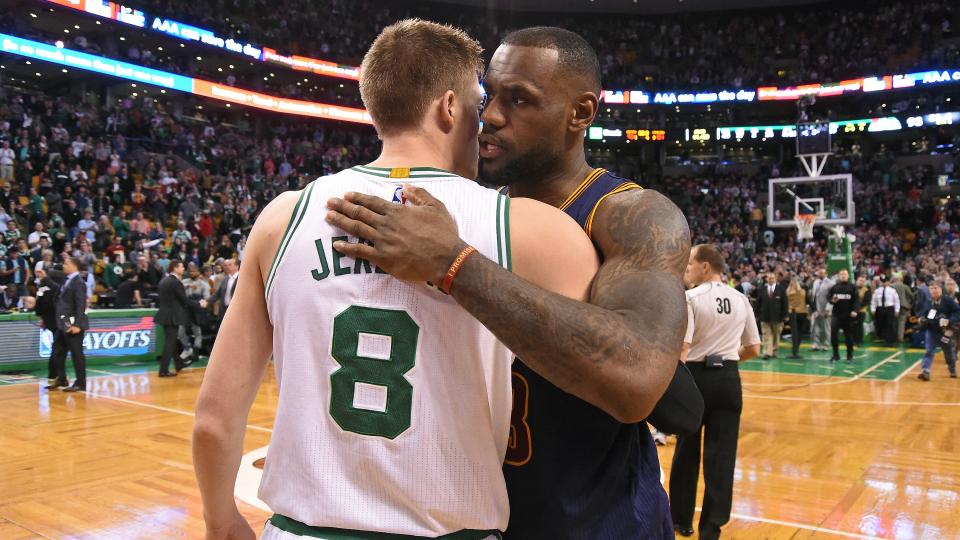 Before the entertaining yet hard to watch 2015 NBA Finals, the Cleveland Cavaliers had three playoff series to win. Their magnificent run began when they took on the Boston Celtics in the first round of the playoffs.

Many thought that the Celtics would swoop in and steal a game on their own home floor while others predicted a sweep without a doubt in their voices. Every game was relatively close until the final minutes, when Cleveland was able to pull away each and every time.

Ultimately, the Cavs swept the Celtics, but not before Kelly Olynyk really put a dent into the Cavs championship hopes when he pulled Kevin Love’s shoulder out of it’s socket. Olynyk maintains that it wasn’t intentional, but this clip of the incident clearly show that Olynyk pulled Love with some sort of intent, and it wasn’t to prevent him from grabbing a loose rebound.

One of Olynyk’s good teammates, Jonas Jerebko, spoke to the media at Shamrock Classic Golf Tournament. He had some interesting things to say, including calling out the Cavs for a rematch.

Jerebko: "we wanna get back to the playoffs and we wanna see Cleveland again or somebody else."

Jonas Jerebko just used the word "championship" & said, "We want to play Cleveland again." Not sure C's are there, but love the confidence.

Those are some big statements from a role player on a borderline playoff team. If you’re not aware, Jerebko is a power forward for the Celtics who averaged 18.2 minutes per game and 7.1 points during the regular season. He was a relative nonfactor in the playoffs, only averaging 2.8 points and 3.5 rebounds in 17 minutes per game.

Then again, who doesn’t want a shot at the Cavs? Boston will likely not threaten Cleveland in the East, but they are headed in the right direction. Meanwhile, the Cavs will try to complete the challenge of staying healthy and winning and NBA Championship.