The Cleveland Cavaliers may have a gem kept aside in Turkey for the moment. Cedi Osman was selected by the Minnesota Timberwolves as the 31st overall pick in the 2015 NBA Draft, until his draft rights were acquired by the Cavaliers.

He has stayed put in Europe ever since, but the versatile swingman recently announced his plan on his future in America, per Semih Tuna of Eurohoops.net.

Osman was pretty clear on what he wants, after being drafted last year by the Cleveland Cavaliers and there’s a roadmap about him leaving Turkey: “I will go to the NBA after next season”. Anadolu Efes was the finalist this season in the Turkish BSL league and also won the President’s cup in Turkey.

Osman’s decision may bode well for his future NBA career as the Cavs’ current roster makes it very hard for him to crack the rotation. But with another year of seasoning in a competitive league, Cedi Osman is only going to get better, and that is good news for Cleveland. 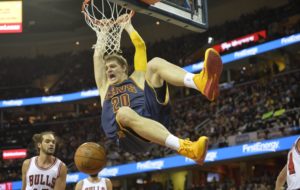