Cedi Osman has been the Cleveland Cavaliers’ International Man of Mystery over the past couple of years.

Scouting reports are very promising as Osman is seen as an athletic guard who could use his height advantage in manning the “one” position at the NBA level. He has been playing for the Turkish national team for years, and has enjoyed success in Europe as a member of the Anadolu Efes club.

In his recent blog, Osman expressed his intent to finally take on the challenge waiting for him at the next level. He will be joining the Cavs in 2017 and is expected to bring with him a skillset that is not yet in Cleveland’s disposal at the point guard position.

But that’s not all he’s taking with him. He also revealed in his blog the nickname that has been used on him courtesy of his teammate.

Sinan Guler, the captain of the Turkish national teams, is a huge Star Wars fans and has given me the nickname “Jedi”.

It’s even better because Osman says he hasn’t watched any of the Star Wars movies.

However, I have not seen the old movies. I tried to with Sinan, but I find them a little bit outdated for my taste. When I’m watching them, for me it’s like they are too old and kind of boring. The new movie seems better visually, so even if I don’t watch the first six I think that I can get into it, even if I don’t understand a thing.

By all accounts, that is one helluva moniker, and Wine and Gold fans will surely hope that the force is indeed strong in the Turkish prodigy. 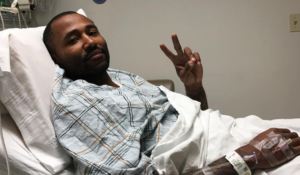