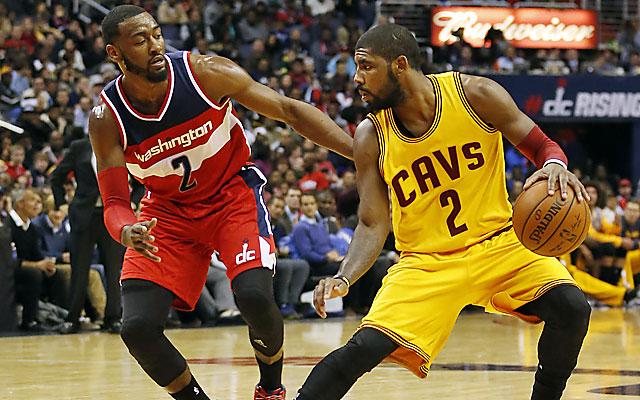 UPCOMING MILESTONES: With 6 points today, Kyrie Irving will pass Campy Russell and move into 9th on the Cavaliers’ Franchise All Time Points Scored list. With 7 points, LeBron James beats out Kobe Bryant for the youngest player to reach 27k points. With 2 more threes from J.R., he becomes the 16th player to ever make 1,700.

After the red-hot Cavaliers cooled off in Tuesday’s loss to the Atlanta Hawks, the Wine-and-Gold look to pick up the intensity they showed through the first six games against the two-win Wizards. While they pose less of a threat than many other teams in the east – the Wizards sit in second-to-last place in the conference – they are still capable of winning games; their two wins come against the Atlanta Hawks (5-2) and the Boston Celtics (3-4).

One thing that the Cavaliers have excelled at so far this season has been points in transition – they lead the NBA with 23.3 points in transition per game. Once again, this is a skill the Wizards have a hard time defending against, as they have given up the 6th most transition points per game. The Wizards have been strong at the rim, however, with the 2nd most putback points per game – 9.6. One other notable source of points for Washington comes from the ball handler off of pick-and-rolls, where they have the 20.0 points per game, fifth highest in the NBA.

The Wizards have averaged more offensive boards per game than the Cavaliers, but Cleveland has them beat in most other categories – including defensive rebounds, assists, turnovers, and points. Two key players to watch on the Wizards will be John Wall – who averages 21.3 points and 9.2 assists (fourth highest in the NBA) per game – and Marcin Gortat – who averages 3.1 offensive boards and 8.7 defensive rebounds per game, or 11.9 total rebounds (fifth highest in the NBA). Also notable are Otto Porter and Bradley Beal, with 16.9 and 15.4 points per game respectively.

This game presents an opportunity for the Cavaliers to get back their three ball that has been a trademark of their game so far, as they look to shake off the .262 they shot beyond the arc against the Atlanta Hawks. While there are no must-win games this early in the season, a convincing win here may allow the Cavaliers to regain the powerful groove they maintained through the first few games of the season.