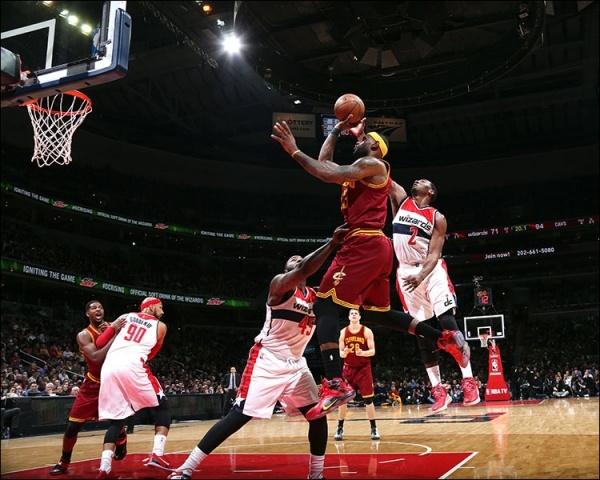 John Wall may have had the All-Star nod ahead of Kyrie Irving last weekend, but Irving came out on top in this head-to-head battle. The Cleveland Cavaliers went into Washington and defeated the Wizards, 127-89. Kyrie Irving led the way with 25 points and seven assists, outplaying Wall’s 18 points and nine assists.

The Cavs’ two All-stars came out of the gates strong, as within the first four minutes of the game, LeBron James had three assists while Irving had six quick points off of layups. After missing their first two shots, the Cavs went on to execute their offense to near perfection, connecting on ten of their next eleven shots. They took a 23-14 lead over the Wizards, while playing some decent defense early. LeBron had 10 points in the quarter, while Kyrie trailed along with nine. Both had three assists each as the Cavs finished the quarter with a lead of 35-26.

Entering the second, the Cavs continued pounding the Wizards with great ball movement, transition slams, and rhythm three-pointers. Iman Shumpert showed some spark off the bench with eleven points in nine minutes. He connected on all three of his 3-pointers, while James added another to extend the lead by 22 points. Eventually, the Wizards got on a little role, cutting the lead to 65-51 at halftime. The interesting stat line at the half was that the Cavs held the Wizards scoreless from beyond the perimeter, going 0/11 from three-point range. Irving’s 18 points and James’ 15 points combined for 33 first half points; the highest the two have combined for at the half all season:

LeBron James and Kyrie Irving have combined for 33 points in the first half, tied for their most in a first half pic.twitter.com/RbTiPNuBsI

The Wizard’s three point draught continued in the third, as they brought their outside shooting total to 0/12. The Cavs, however, splashed in 10 three pointers in the game. Eventually, Otto Porter would break the seal, with the Wizards’ first and only three point basket of the game, but it didn’t matter at that point with the Cavs eventually taking a 33 point lead early in the fourth. Even though LeBron sat for the fourth, he finished with 28 points and six assists.

What’s apparent is the Cavs’ plethora of three-point shooters. Just having them there gives James and Irving ample room to operate within their comfort zones as well as drive to the rim relatively unhindered. It forces defenses to bring in a help defender, freeing up an open shooter on the perimeter for James or Irving to dish to. This potent offensive strategy was the hallmark for the Cavs dominance this game, as well as during the recent 14-of-16 winning stretch. Couple that with the surge in defensive intensity, and you can see the reasoning behind LeBron’s recent remarks of this team can definitely win it all with this group of guys.

Irving dazzled an opposing crowd, with plenty of breathtaking dribble moves and contorting layups that garnered some “oohs” and “ahh’s” from the Washington crowd. Love may have struggled, but his value is largely unappreciated. For the month of February, Kevin Love leads the league in +/-. That means that, while he’s on the floor, his team outscores their opponents more than when he’s off the floor. Indeed, he’s done a great job sacrificing and appropriating himself into the flow of the game.

ESPN Stats and Info’s Twitter page had a stunning stat about the Cavalier victory tonight:

With this win, the Cavs grab hold of the fourth seed in a tightly packed juncture in the Eastern Conference with a record of 34-22. They play the Knicks next, in New York at 1:00 PM ET.

As Paul Pierce drives left while defended by LeBron James, Kevin Love comes to help and try to cut off any passes. As Pierce tries a bounce pass between Love and James to the cutting Marcin Gortat, Love deflects the ball to the three-point arc, where James recovers it and ignites the fast break. With only one man back, James gives it up early to Kyrie Irving, who throws up the perfect lob for James who flushes it home:

The unsuspecting Kris Humphries is surprised by LeBron James, who swipes the ball from his hands as Humphries turns towards him. James tracks down the ball and throws it down, tomahawk style:

Kyrie Irving grabs the loose ball and races downcourt on the fast break. Irving uses his patented up-and-under move to spin the beautiful reverse layup into the basket while drawing a foul from John Wall: