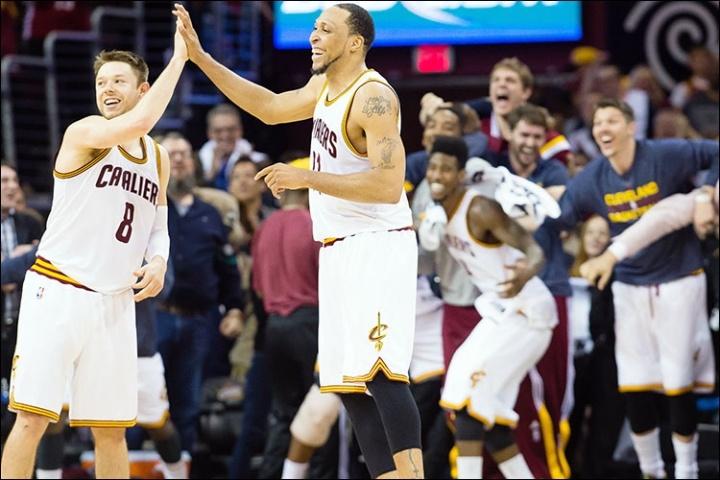 The Cleveland Cavaliers had one more home game to finish out their season. They would rest LeBron James however, and were expected to play the starters limited minutes in another meaningless game against an Eastern Conference team that had already locked up their playoff spot. Kyrie Irving would be even more limited after leaving Monday’s game with right hip tightness.

The Wizards, who also rested their starters tonight, came out aggressive and used a 12-0 run to take a 23-8 lead over the Cavs early in the first. But Kevin Love scored six of the next 12 Cavalier points as Cleveland trailed 28-20 after one quarter of play.

After exchanging baskets to start the second, Washington still led 52-37 in what looked like it was going to be another blowout. But the Cavs calling card, which has been their incredible three-point shooting, really showed as Cleveland knocked down six three-pointers en route to 33 second quarter points capped by a James Jones buzzer-beating three. Cleveland closed the gap to 56-53 at halftime.

Cleveland hit back-to-back threes to take their first lead of the game at 61-60, but Washington responded with a 12-5 run of their own to retake a seven point lead. Both teams exchanged baskets throughout the quarter, and with Cleveland unable to retake the lead, they tailed 79-74 after three quarters of play.

The Cavs blew up to start the fourth, not only because Brendan Haywood got some playing time, but because they knocked down three straight three-pointers as part of a 10-0 start to the fourth (two by Matthew Dellavedova, one by Iman Shumpert), as the Cavs took an 84-79 lead. After a Will Bynum free throw, Shumpert knocked down another three as well as an 18-foot jumper to give the Cavs an 89-80 lead. After a Martell Webster three, Delly and Marion hit two shots to give the cavs their largest lead at 93-83. Once again, Washington stormed back with an 11-2 run to get within 95-94. Kendrick Perkins gave the Cavs a two point lead with 50 seconds remaining, but Dejaun Blair scored a seven foot jumper to tied the game at 101. Cleveland failed to score and both teams went to overtime in their finales.

In the extra session Delly scored the first five points for the Cavs, but the Wiz tied the game up again, this time at 106. Brendan Haywood, who hadn’t seen playing time in months, hit a crucial free throw to give the Cavs a 107-106 lead. When Will Bynum hit a floater on the baseline to retake the lead, Delly found Haywood in the lane for a short, free-throw line jumper that went in and gave the Cavs a lead they would not relinquish this time. Washington was called for a five-second inbounding violation, and after Delly hit a pair of free throws, Shawn Marion stole an inbounds pass and threw it down on the other end to give the Cavs the 113-108 victory.

Cavs close out regular season on a high note: Shawn Marion dunks then gets mobbed by his teammates pic.twitter.com/y4GN7F2LyJ

Kevin Love got hot in his 18 minutes on the floor, scoring 19 points on 6-12 from the field and 5-6 from downtown. He finished with only three rebounds, which means that he will finish short of averaging a double-double for the first time since his rookie season. Matthew Dellavedova came up big in 33 minutes, scoring 18 points and dishing out 12 assists while only turning the ball over three times. Iman Shumpert also scored 18 with six rebounds. Tristan Thompson played just 22 minutes, scoring 12 points and eight rebounds. The Cavs bench combined to score 74 points tonight, the highest total since also scoring 74 on December 11, 2007.

The Cleveland Cavaliers begin their playoff series with the Boston Celtics Sunday afternoon on ABC. Times are still to be announced, but the NBA is sure to release it as soon as possible.

Shawn Marion steals the Wizards’ inbound pass and throws it down on the other end to seal the Wine & Gold victory!

He was mobbed by teammates right after: