Cavs will not cut Chris Andersen, expected to try and trade him The Cleveland Cavaliers were dealt a blow to their season this past week with the announcement that Chris Andersen would miss the rest of the season after tearing an ACL and having season-ending surgery. Although losing Andersen won’t have a huge effect on the Cavs’ rotation, it will still have affect the Cavs and their luxury tax bill.

Cleveland signed Andersen to a one-year, $1.55 million contract this past offseason, all of which is guaranteed. That means whether they keep or cut him, they’ll have to pay the tax penalty on his guaranteed money. If they trade him, however, that tax penalty would no longer apply for Andersen, but for the player they would receive instead (if they receive a player, that is).

Without Andersen, Cleveland has Tristan Thompson, Kevin Love, and Channing Frye as the only true big men on the roster. Come playoff time, the rotation will probably be trimmed; until then, Cleveland likely needs another big to be able to rest Love and even Thompson throughout the season.

If they cut Andersen to fill his roster spot, they’d have to pay the taxes on his salary and whomever they signed.

It means the Cavs would likely try to trade Anderson as they work through their options, and would do the same for Williams and his $2.1 contract if possible.

There’s no rush at the moment, but the Cavs clearly have some decisions to make by the trade deadline. 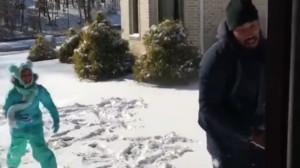 JUST IN: J.R. Smith has snowball fight with his daughter
Related TopicsCavaliersChris Andersen