What Jarrett Allen’s injury means for the Cavs 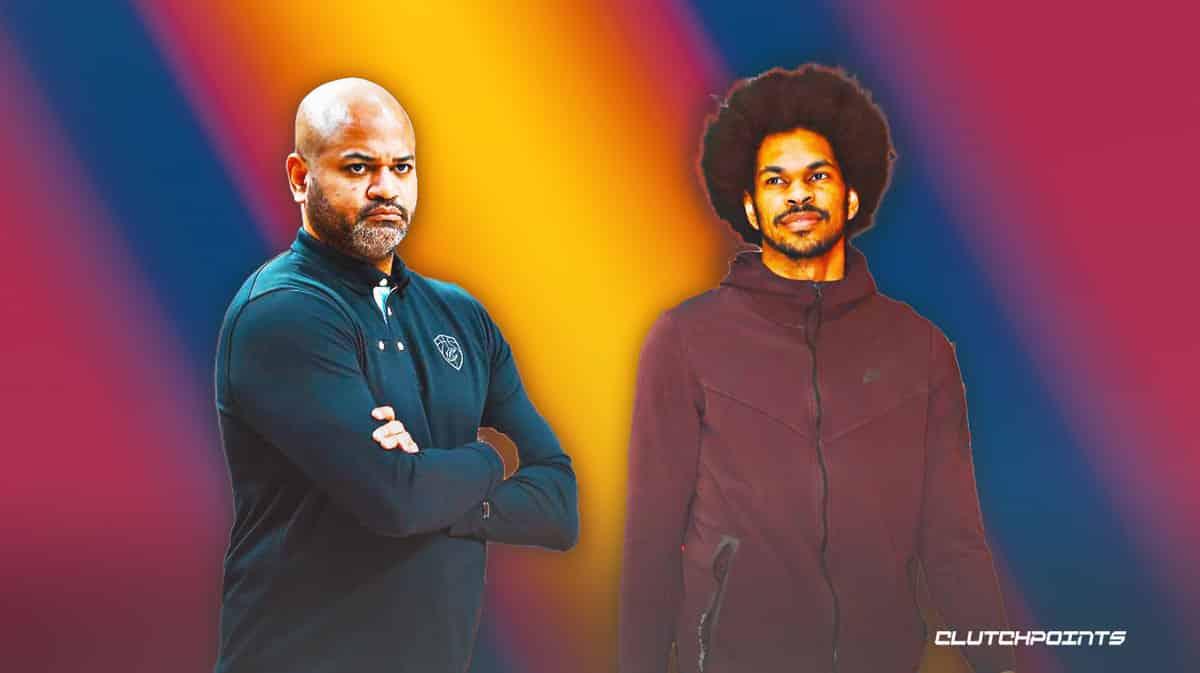 The Cleveland Cavaliers have stumbled out of the gates just a bit following the All-Star break. Despite the Cavs having a successful weekend of festivities in their hometown, the storybook season they’ve had so far is beginning to catch up to them as oppositions are beginning to crack the Cavalier code and personnel is getting stretched too thin.

Injuries have been stacking up for the team all season, forcing players into roles they’ve been previously unfamiliar with. Jarrett Allen is the latest name to be added to that list. However, the resiliency of this team has been enough to not only keep them afloat, but compete with nearly every team.

Eventually, too much is too much, though. JB Bickerstaff’s offense is supremely reliant on the ultra-effective Darius Garland-Jarrett Allen pick-and-roll. Both players are vividly enhanced when the other is on the court, and the Cavs as a whole begin to crumble when either is out. Garland just returned from a nagging back injury. Now his partner-in-crime is on the mend indefinitely.

Cleveland has some tall players. This year’s squad isn’t called Tower City for nothing. However, their depth at the 5 position isn’t all that deep. Outside of Evan Mobley and Lauri Markkanen, who typically start beside Allen, the only other bigs on the roster are Kevin Love and Ed Davis.

Jarrett Allen is a terrifying presence on defense for any player attacking the paint, a freak athlete in every regard. He makes smart, calculated decisions and operates in a rather inexplicable smooth manner. Offensively, he’s an absolute force rolling towards the rim, boasting an arsenal of effective finishes that combine his athleticism and skill splendidly.

You really have to be perfect guarding any Jarrett Allen 2-man actions or else… pic.twitter.com/2MF5ppQYc0

How do you replace that? Certainly Love nor Davis can fill the role that Fro operated in with this team. JB Bickerstaff will have to get creative, especially if the injury turns out to be a prolonged one. Multiple options are on the table, but one thing seems to be certain: the Cavs will need an identity change in Jarrett Allen’s absence.

The Rotation Changes that will be made

Jarrett Allen being sidelined likely means that Tower City will be scaled down a bit. Odds are that Lauri Markkanen and Evan Mobley slide down to the 4 and 5, respectively. Kevin Love, Ed Davis, and Cedi Osman are all candidates to start in the remodeled starting lineup, but Dean Wade should be the one who draws the start.

Wade’s malleable and clean game makes him a useful stopgap for any starting Cavalier in the frontcourt. At 6’9″, the Kansas State product is your ordinary 3&D wing who can give you a little extra spice off-the-dribble, thanks to his four years in a featured role in college.

With Darius Garland and Isaac Okoro rounding out the starting lineup, as well as Rajon Rondo and Caris LeVert still dealing with injuries of their own, the 2nd unit will be made up of these 5 players: Kevin Love, Cedi Osman, Brandon Goodwin, Lamar Stevens, and Ed Davis.

Love and Osman are guaranteed to get their share of minutes, and Goodwin is all but a write-in, due to Garland being the only other guard in the rotation. Since JB Bickerstaff almost always prefers to run the 9-man rotation, Stevens and Davis will likely fight for that last rotation.

Although Davis can put in solid minutes here and there, it may be unwise to commit much time to him, given his rapidly deteriorating athleticism. He’ll give you all he’s got, but that’s very limited at this stage of his career. Kevin Love can fill in the backup five minutes, and if he can continue to give effort defensively, then there’s not much of a drop off defensively from Ed Davis to him. Investing the leftover minutes in second-year man Lamar Stevens is a wise decision.

Another great defensive rotation by Kevin Love. He’s not only NOT been a glaring negative on that end this year, he’s helping contribute to the Cavs’ elite defense pic.twitter.com/ZqoEpgHppZ

New Offensive Opportunities are there for the taking

There is no positive spin on Jarrett Allen missing games from a pure game-winning perspective, but with one of Cavs’ key cogs out, there are possibilities abounding for a few players in Cleveland’s starting lineups who will receive slightly more room to wiggle their elbows. The most obvious one being Rookie of the Year favorite, Evan Mobley.

Mobley has received loads of benefits from playing alongside the Fro this season, despite fit concerns being an early topic among many talking heads. He doesn’t do many traditional center things, such as bruising, screening, and rebounding at a high level. Starting him at the 5 gives him more potential to experiment in a spaced out halfcourt. Evan has struggled to get going recently, so a change of scenery could help him get back on track to where he was before.

Just watch Evan Mobley and Jarrett Allen this possession. All-Defense is a very, very select group of talented guys, but both of them should be in the convo. pic.twitter.com/GlCPxlB1VK

As for Lauri Markkanen and Isaac Okoro, both should see the benefits of a more spacious starting unit. Markkanen and Okoro have both shown the ability to drive to the cup before, but have struggled to do so this season, in Cleveland’s cramped frontcourt. Getting these reps in could be valuable in aiding the development of that area of their games.

He does help the Cavaliers, because he unlocks a lot of things defensively and just fires from 3 with no hesitation. Hard for him to get into a rhythm at SF in a cramped halfcourt rather than PF, though.

Could a new Cavalier be brought in?

When Darius Garland was out, the Cavs brought in Tim Frazier on a 10-day contract to help supplement the severely lacking guard depth. Now that Garland’s back with Rajon Rondo and Caris LeVert soon joining him, Koby Altman can afford to use their open roster spot on a big rather. The market of names isn’t particularly appealing.

The top 3 names available are likely Enes Kanter Freedom, Willie Cauley-Stein, and Moses Brown. While the first name is likely the best NBA player of the bunch, regardless of what you think of his stance, he brings with him a significant media circus that the Cavs aren’t likely to want to deal with at this point of the season. Willie Cauley-Stein is likely the best mix of NBA-caliber, NBA-ready, and low-maintenance out there. The 28 year-old former 6th overall pick would be a worthwhile addition for a Cleveland team that really needs another big body.

No matter what they do, the impact of the Cavs’ 7-foot first-time All Star is impossible to replace. What JB Bickerstaff and the squad can do is try to minimize the loss and experiment with some new opportunities that are brought forth out of the unfortunate situation. The continued development and success of this young core is key.