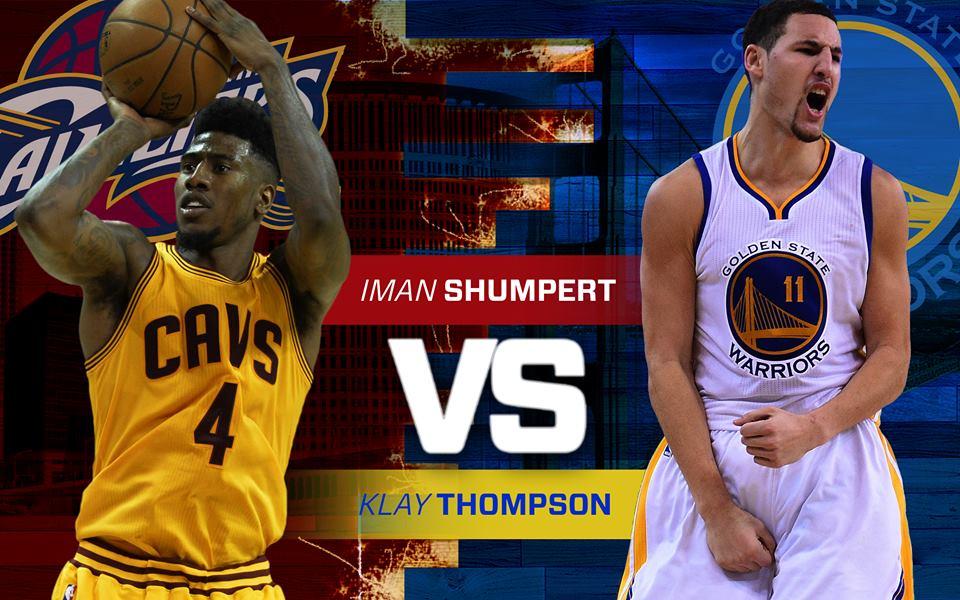 The Warriors got very lucky with their first round pick in 2011. Klay Thompson made the all-star team this season, fresh off a 5 year $80 million extension signed over the summer. J.R. Smith and Iman Shumpert both came to the Cavs from the Knicks in January, and immediately found important roles for the LeBron-led Cavs. They immediately took over scoring and defense in place of Dion Waiters, and did more than Waiters could have, all at a lesser cost. In two regular season meetings, J.R. scored 31 points, grabbed nine rebounds, and dished out six assists. He shot poorly, though, shooting only around 35%. Shump did not play in one game due to injury, and did not score in the other, as he was transitioning back from injury at the time. Klay had 37 points, 11 rebounds, and seven assists in the two meetings, shooting around 40% both times. J.R. had a career season, while Shumpert played a very big role in the Cavs defense. Klay had a year much deserving of a new contract, one in which he averaged 21.7 points per game. That number is particularly high considering that he shared the backcourt with league MVP Stephen Curry. Which team has the advantage at the Shooting guard position? Let’s find out.

The assumption is that HC David Blatt will keep with the lineup he used in the ECF, with Iman Shumpert starting at SG and J.R. Smith coming off the bench in a 6th man role. Offensively, Klay has a big advantage over Shump, but is more similar to the J.R. of late. Shumpert is a good role player on offense, with his ability to pass the ball, space the floor, shoot threes, and drive to the basket. While he is above average offensively, he cannot really take over a game in the way that Klay or J.R. can. J.R. has gotten into rhythm lately, helping LeBron with scoring on the offensive end in absence of Kyrie (due to injuries). He is a deadly three point shooter, draining shots with opponents in his face without a care in his mind. This makes him the X factor for the Cavs going into these Finals. But, he can get into a shooting slump and start jacking up bricks like he was known for when he played for the New York Knicks.

Klay Thompson is probably most known for his absurd game against the Sacramento Kings in the regular season, where he went off for 52 points, including a record 37 points in the third quarter on 13-13 shooting, including 9-9 from deep. Similarly to many times throughout this season, it seemed as if he could not possibly miss. In these 2015 playoffs so far, though, Thompson has had a lot of trouble making shots, especially 3 pointers. While his back-court mate Stephen Curry had a great series against the Houston Rockets in the Western Conf. Finals, shooting 55% from deep, Klay had a rough time against the Rockets’ mediocre defenders. It will be interesting to see if he can bounce back and be effective in these Finals.

Defensively is where Thompson has always been strong. His 6’7” height gives him a huge wingspan and allows him to shut down opponents with ease. Even when his offense struggles, Thompson is able to make up for it through his defensive play. He often does get the most difficult assignment, though, since Steph is usually smaller than the opposing point guard.

Shump and J.R. have both stepped up their defense since joining the Cavs, just like Kyrie did throughout this season. Shump has continued to improve his elite defense, J.R. has gone from being known as purely an offensive player to now being seen as a two way player. Coach Blatt most likely kept Shump in the starting lineup even with Smith healthy so that Shump can help Kyrie ease the burden of defending the opposing team’s best player. This way, when the second unit comes in the game, Delly can take over Shump’s defensive duties and J.R. can focus on scoring.

J.R.’s biggest advantage is also something that can knock off his game. Especially in these playoffs, J.R. has become widely known as the guy who shoots crazy threes, whether he is open or defended well. Sometimes on an off night, though, he’ll jack up shots that brick or even airball. It’s a nailbiter trying to figure out which J.R. we will get, though if these playoffs are any indication, we’ll get the hot shooting J.R. for the Finals.
Although Shump is very strong defensively, he sometimes gets beat on the dribble. While it is something he is working on improving, Steph may try to take advantage of Shump’s weakness to attack the rim. Aside from that, Shump will do his best to not give Steph any room to get comfortable. Shump is underrated when running down his defender, as he often is able to catch up quickly and/or block the shot from behind. It’s pretty certain that with LeBron’s guidance, J.R. and Shump will only continue to improve Defensively.

Klay’s biggest advantage is his size and length. He can easily post up smaller defenders like Kyrie/Delly, but also shoot over them if necessary. Times like the King’s game, Klay gets hot while getting defended by someone similar to Darren Collison. He has great offensive awareness, which gives him the knowledge when it comes to making the smartest play to help his team win. The biggest disadvantage at this point for Thompson is the concussion he suffered during the Warrior’s game 5 win over the Rockets. As of now, he is out indefinitely, and it is uncertain if he will be ready to go for game 1 of the finals. This pretty much comes down to how healthy he is when he returns, and if he can get back into the groove or not.

Overall, Klay has the upper hand against the “Cleveland Knicks”, but with the combination of Thompson’s injury, his mediocre offensive play, and Smith’s hot shooting, the ball is in the Cav’s court.