Tristan Thompson has been the biggest presence around the glass for the Cavs this postseason. The big man is averaging nearly a double-double with 9.9 rebounds and 9.4 points per game. Add the stats to his tremendous offensive rebounding ability as well as his interior post defense, and you can tell why he is a crucial element to the Cavs playoff run.

On the other side of the court, Draymond Green is a completely different power forward. While he’s smaller and less aggressive than Thompson, Green adds in some handling skills and the ability to make some plays on offense, making him a unique big man. Draymond Green also has an outside shot, something that Thompson has had trouble dealing with during the post season.

While Thompson should easily be able to shut down Green in the paint, if Green gets an opportunity to shoot an outside jumper, Thompson could falter defensively. While he’s only shooting 26.4% from beyond the arc this postseason, that number could easily go up if Thompson slacks on defense. Green is more of an all-around big man and is performing better in the playoffs, averaging 14 points, 10.8 rebounds, and 5.3 assists per game.

While Thompson is also heating up in the playoffs, his stats aren’t as good as Green’s. What isn’t shown, however, are Tristan Thompson’s hustle stats – all of his grit and grinding in the paint, boxing out, and being an overall presence around the basket. The biggest stat Thompson brings to the table is his offensive rebounding – averaging 4 a game during this playoff run. 4 extra chance possessions for the Cavs would be huge against the Warriors. While this matchup is unconventional due to Green and Thompson being very different types of players, it’s hard to tell who has the advantage.

One factor to note though is that Draymond Green has been worse at home than on the road during the playoffs, averaging only 12.5 ppg, 9.9 rpg, and shooting 35.2%, compared to 15.7 ppg, 12 rpg, and 51.2% shooting outside of Oracle Arena. If Thompson can shut Green down in games 1 and 2, he could surely take the advantage in the series.

Overall, Draymond Green will probably fair better on the offensive end in terms of points and production due to playmaking ability, but he’ll have to utilize his jump shot. On the other end of the court, Thompson will have the advantage on defense in the paint, and will secure more boards than Green. While both players serve vastly different roles, they are both necessary pieces in their team’s overall performance. Both guys are their team’s backbone, and a large part of their success relies on these two’s performance. 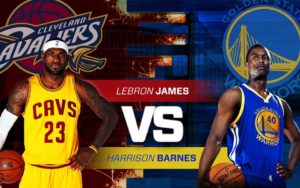