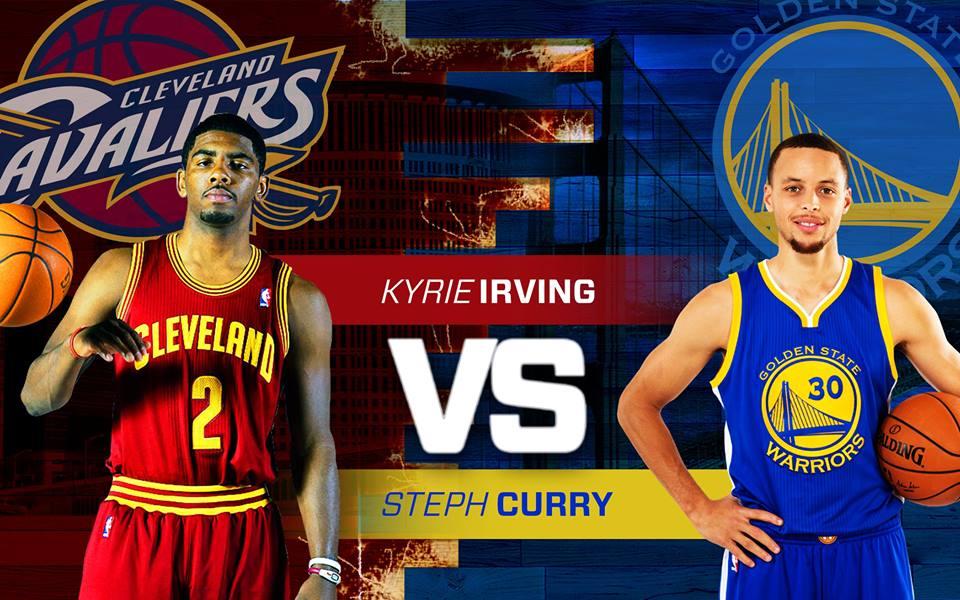 Kyrie Irving will have his hands full against Stephen Curry. Curry is a more explosive, quick shooting version of Derrick Rose, who Kyrie had trouble keeping up with in the Eastern Semifinals. Add on Kyrie’s injury, and it seems like David Blatt will put Iman Shumpert on Curry when he can to allow Kyrie to get some rest. One problem, though, is that Curry’s backcourt mate is 6’7”, and he has a size advantage to any other guard on the Cavs roster aside from Joe Harris.

Those percentages are both fairly impressive due to the fact that they both play with many other great players who also touch the ball a fairly good amount. While Steph clearly has the upper hand, one has to keep in mind that Steph is the leader of his team, while Kyrie is still second fiddle to LeBron. It is actually quite impressive that Kyrie put up such numbers despite playing WITH LeBron. That really shows their ability to incorporate their playing styles to match one another. In two head to head matchups against each other, Kyrie actually outperformed the MVP, despite splitting the series 1-1. Kyrie averaged 23.5 points, 4.5 reb, and 3 assists per game while Steph averaged 20.5 points, 2 reb, 8 assists.

Offensively, both players thrive off their teammates. They both work the screens, looking for holes in the defense to get into the paint. But they also often play the pick and pop, which allows them to get open for the 3 point shot. Kyrie’s injury aside, their offensive skillset is very similar. What’s not to be forgotten is Curry’s quick shot, which is virtually un-blockable. The Cavs will need a healthy Kyrie if they want to see him perform at a high level to help lead the team. Steph, on the other hand, was the league MVP, posting career high numbers while shooting 3’s at an absurd rate. Both Curry and Kyrie are threats to score, and they are very good at getting out of a shooting slump. Like what was mentioned earlier, if Kyrie can get healthy in the 9 day break the Cavs have before the Finals, then his offensive ability is definitely comparable to Steph’s. On defense, Steph seems to have the slightest advantage over Kyrie. Steph has really stepped up his defense this year, contesting shots and forcing opponents into bad passes. Curry has a smaller build than Kyrie, though, so he will have his hands full keeping Kyrie from backing him down in the post. Kyrie has also improved his defense in leaps. It seems that playing with the best player in the world and other great defenders such as Iman Shumpert has encouraged Kyrie to really focus on shutting opponents down. Kyrie will have help on defense, with Shumpert also available to guard Steph. Regardless of whoever guards Curry, they’ll be running around trying to keep up with him.

Curry’s number one advantage is his quick shot. While normal players release the ball at the peak of their jump, Curry releases the ball right before he reaches the peak, which always catches opponents off guard. Rarely does a defender block Curry’s jump shot. Also, there are some games where he just can’t miss from 3 point. In the Western conference finals against the Houston Rockets, Curry shot 55% from 3 point throughout the series, which is absurd. Another advantage is his stamina. Seeing him run around the court, he doesn’t really seem tired, ever.

Kyrie will need to take advantage of his size over Curry. They are both listed at 6’3”, but Kyrie has a bigger build, which gives him the advantage in the paint. Kyrie loves to post up smaller defenders on the baseline, where he shoots his deadly turnaround jumper. Another advantage of Kyrie’s is his ability to put the ball on the floor and attack the paint. He carves through any defense with ease, going through even the smallest of gaps. Steph can hit floaters, but Kyrie drives right to the basket and always finds a creative way to lay it in.

Why The Cavaliers Can Still Win A Championship Without Kevin Love

At the moment, Kyrie’s biggest weakness is his injuries (foot and knee). His injuries have taken a toll on him, and the Kyrie that we saw during the Eastern conference finals was nothing compared to Kyrie from the regular season, especially when he put up a career high 57 points against the Spurs. During the series against the Hawks, Kyrie sat out two games, and during the other two games, he seemed to hobble around the court at times, and he was clearly not as explosive as he normally is. Not only does this limit his offensive ability, but this will also put a burden on his shooting. Since he is not as quick, he will not be able to beat defenders to the basket, which forces him to rely on his jump shot. If its falling, then everything is good. But if he is having a cold shooting night, then he will be in trouble.

Steph has very few weaknesses aside from his size. Similarly to Kyrie, Steph also sometimes relies on his jumper too much. And when it’s not falling, the Warriors are in trouble. The Warriors rely heavily on Steph to distribute the ball and score, so if he is having an off night, the Warriors are doomed.

While both players are great at their individual games, Steph has the slight uphand in this matchup, mainly due to Kyrie’s injury. This might change over the course of the week heading into the Finals, depending on how Kyrie’s rehab goes.