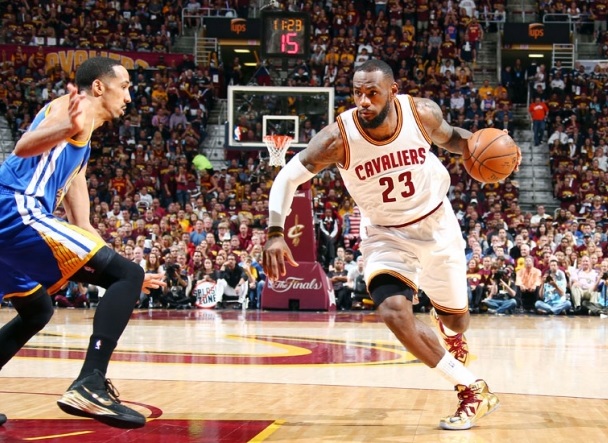 The Cleveland Cavaliers played their hearts out in Game 6 of the NBA Finals, but were unable to force a Game 7 back in Oracle Arena. Instead, the Warriors celebrated their first NBA Championship in 40 years in Cleveland’s Quicken Loans Arena. Unfortunately, it was not the fairy tale ending everyone wanted when LeBron James announced his return to Cleveland last summer.

The Cavs once again started off badly, this time turning the ball over left and right, it seemed. Cleveland’s 7-2 lead quickly turned into a 28-15 lead after one quarter. It was quarter that put the Cavs in big hole as LeBron James was missing easy shots at the rim without getting any foul calls, and everyone seemed to force passes that weren’t exactly there. As a team, Cleveland finished with nine first quarter turnovers.

The Cavs started the second quarter on a 14-6 run to get within 34-29. Despite Klay Thompson being in foul trouble most of the night, the Warriors were still able to get wherever they wanted on the court. In the second quarter, those shots didn’t go down, and the Cavs made their 8-0 to close the half and get within 45-43 at halftime.

Early in the third, Cleveland took their first lead at 47-45 since leading 8-6> The shots that weren’t going down for the Warriors in the second went down in the third as the Warriors went on a 24-8 run to take a 69-55 lead with just under three minutes remaining in the third. Cleveland went into the fourth down 73-61.

Despite making a mini-run early, the Warriors controlled most of the fourth quarter until their 98-85 lead with about 1:54 left in the game. The Cavs attempted a very late comeback with a 12-4 run as J.R. Smith suddenly decided to get hot and hit three straight three-pointers. But Golden State hit their free throws down the stretch and sealed their first NBA Championship in 40 years.

The Warriors played their team game and eventually, the shorthanded Cavs just ran out of gas. In the end, Cleveland’s championship drought will have to endure for at least one more year as the Cavs fall in six games.