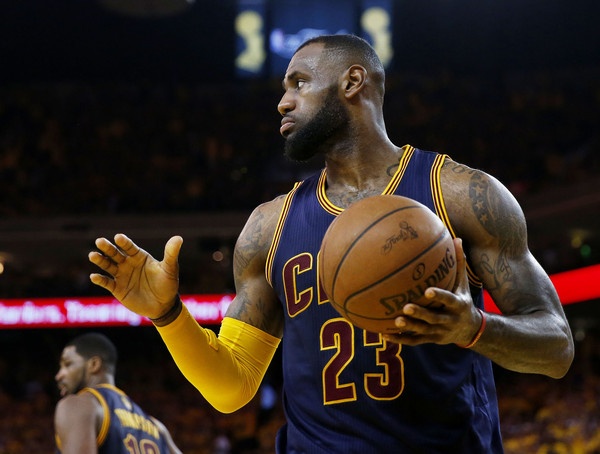 With a chance to push the Golden State Warriors to elimination back at the Q with a Game 5 victory, the Cleveland Cavaliers wasted a brilliant triple double performance from LeBron James and failed to get their second road victory of the Finals as they lost 91-104. Tuesday night will be the first time that the Cavs have faced elimination all postseason.

The game started off badly for both sides, but especially for the Cavs. Both the Warriors and Cavs had a pair of turnovers to start, and Cleveland had 5 turnovers in their first seven possessions. Dellavedova scored the Cavs first basket of the game after three minutes had already gone by. they didn’t stay down for long as J.R. Smith hit two quick threes and got the Cavs tied with the Warriors at 22 after one quarter of play.

Cleveland started the second quarter on a 15-8 run to take a 37-30 lead after the Cavs used an excellent mix of inside-outside game with J.R. Smith and LeBron James. In usual Golden State fashion, the Warriors mounted their comeback with a good dose of Stephen Curry and Leandro Barbosa. Together, they helped the Dubs take a 51-50 lead at the half.

The Cavs and Warriors kept the score close both ways for most of the third quarter. That is, until LeBron James took an early seat with two minutes in the third to get ready for the fourth. Golden State took a 63-60 deficit and took a lead of 73-67 going into the fourth and final quarter of this pivotal Game 5.

LeBron came back in to start the fourth and Cleveland scored eight of the first 10 points to quickly tie the game up at 75 apiece with just over nine minutes remaining. But the current MVP scored 14 of his 37 points in the fourth as the Warriors held off any comeback the Cavs attempted to make. LeBron James missed a few easy ones at the rim, and despite getting his second triple double of this series and sixth career in the NBA Finals, the Cavs were outworked down the stretch and eventually fell to the Warriors 104-91 in Game 5.

LeBron James didn’t shoot well again (15-34), but still put up 40 points, 14 rebounds, and 11 assists. Tristan Thompson showed up with 19 points and 10 rebounds, including five offensive. J.R. Smith scored 14 points in the first half…and that’s it. Smith couldn’t get anything going in the second half and finished with 14 for the game. Iman Shumpert chipped in 10 points and Delly added three.

For the Warriors, Stephen Curry put up his series high 37 points, Draymond Green had 16, Andre Iguodala had 14, Leandro Barbosa had 13, and Klay Thompson had 12.

The Cavs now head back home with only one day of rest and their backs against the walls for the first time this postseason. 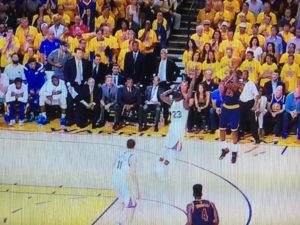