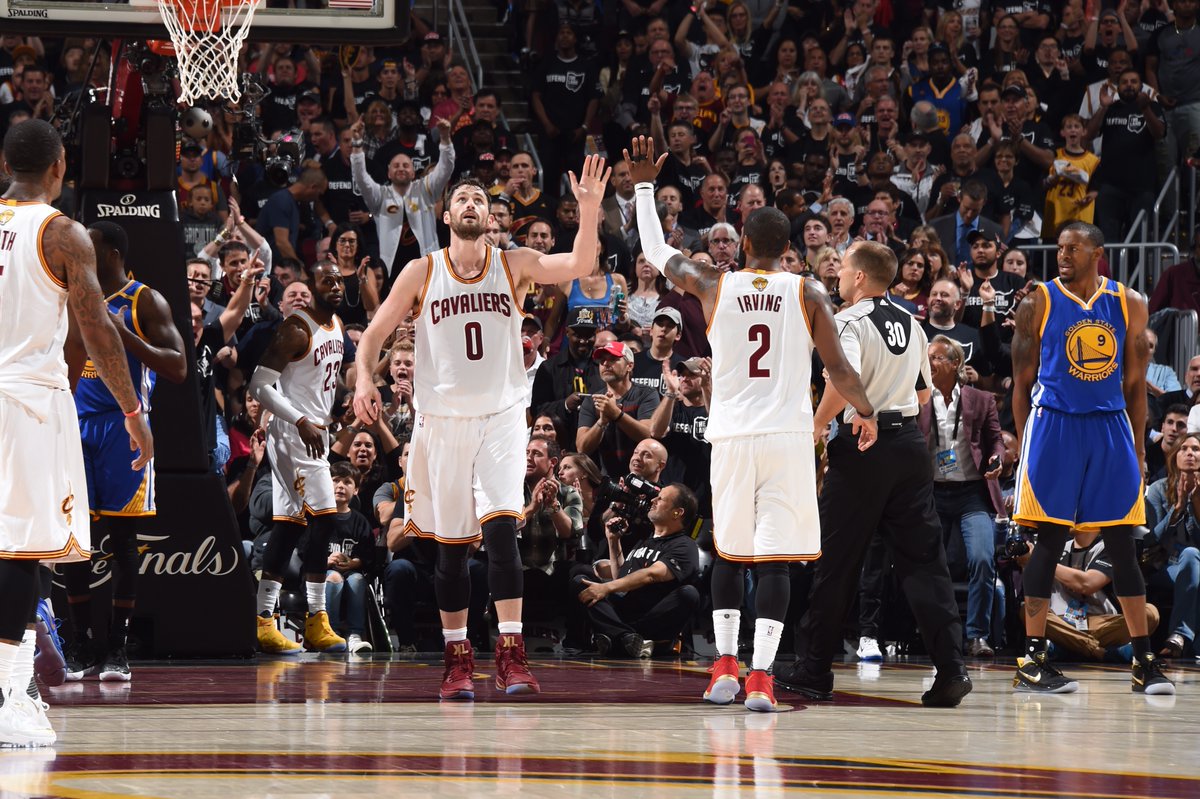 Tonight, the defending champion Cleveland Cavaliers squared off against the Golden State Warriors in Game 4 of the NBA Finals. With the Warriors holding a 3-0 series lead, the Cavs were in desperate need of a win.

J.R. Smith opened the scoring of tonight’s game with an open three-pointer. Not to be outdone, Kyrie Irving followed with a pair of buckets. All of sudden, the Cavs had an early 8-2 lead.

Cleveland’s momentum continued to build, and the crowd inside Quicken Loans Arena was feeling it. Near the nine minute mark of the first, Smith stepped up and buried another three to give the Cavs their biggest lead of the series thus far, 14-5. Warriors head coach Steve Kerr was forced to call a timeout.

After the break, Kevin Love scored his first two points of the night with a backdoor layup, extending Cleveland’s lead to 11. Just moments later, K-Love sank another three — this time from the corner store.

Turnovers and fouls began to be an issue for the Warriors in the first quarter. As a result, the Cavs were able to push their lead to 16.

Kevin Durant finally gave the Warriors a spark with a walk-up three over Tristan Thompson, reducing the gap to 10. Now it was Golden State building momentum.

The Cavs, fighting for their playoff lives, managed to stem Golden State’s run and led by 16 through the first 12 minutes of play, 49-33.

Cleveland’s 49 points were the most scored in any quarter in NBA Finals history.

Irving pushed Cleveland’s lead to 19 in the early phases of the second quarter with a three-pointer over Klay Thompson.

Each time the Warriors made a run, the Cavs had an answer. With just over seven minutes remaining in the half, Smith rattled home another three — this one coming all the way from Strongsville.

LeBron James then gave the Cavs a 20 point advantage with an easy lay-in, forcing another Golden State timeout.

Irving caught fire in the waning minutes of the half. Whether he was dribbling, driving, coming off of a screen, or simply shooting the ball, the Warriors had no answer. In fact, Uncle Drew made 11 of his first 14 attempts.

At the halftime horn, the Cavs had knocked down 13 three-pointers, leading to the highest point total for any half in NBA Finals history.

Coming out of the locker room, the Warriors scored five quick points, forcing a timeout from Cavs head coach Tyronn Lue. Golden State’s momentum was short-lived, however. A pair of three’s from Irving and Kevin Love pushed Cleveland’s advantage back to 20.

Near the five minute mark of the third quarter, Warriors forward Draymond Green picked up his fourth foul, forcing coach Kerr to call him to the bench.

The Warriors mounted a brief comeback effort in the early stages of the fourth, but the Cavs just kept pounding away with three-pointers.

With just under five minutes showing on the game clock, the Cavs had rebuilt their 20 point lead and seemed to be in control. The crowd inside The Q began to chant “Cavs in seven, Cavs in seven.”

When the smoke cleared inside Quicken Loans Arena, the Cavaliers, who set a new NBA record for three-pointers made in the Finals with 24, walked away with a 137-116 wire-to-wire victory to force a Game 5 in Oakland.

Tonight’s game ball goes to Kyrie Irving. In his 41 minutes of action, Uncle Drew recorded a game-high 40 points (15-of-27 field, 7-of-12 from three), seven rebounds, and four assists.

Honorable mention goes to LeBron James, who finished Game 4 with 31 points, 11 assists, 10 rebounds, and one steal in 41 minutes. With his performance tonight, James passed Magic Johnson for the most triple-doubles in Finals history.

Game 5 is set to tip at 9:00 p.m. on Monday, June 12th. ABC will have live broadcast coverage. Let’s see if the Cavs can keep their momentum rolling. 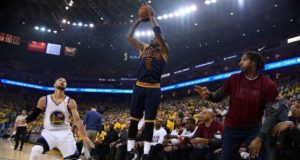