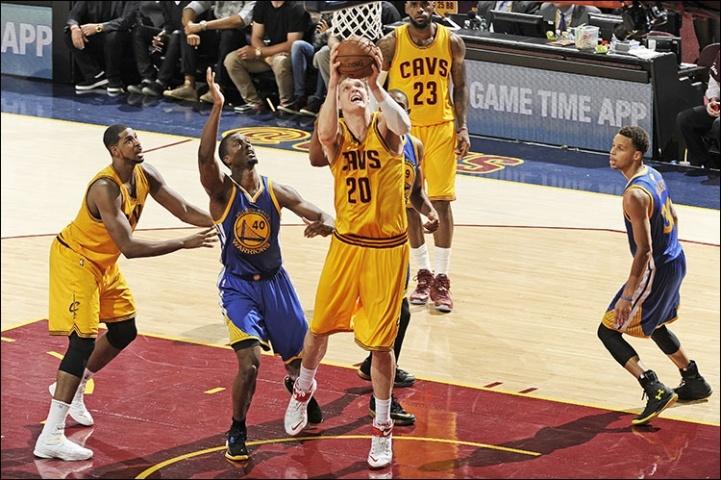 The Cleveland Cavaliers gained home-court advantage with a Game 2 road victory in Oakland. With a chance to go up 3-1, the Cavs fell in Game 4 of the NBA Finals and gave home-court back to the Warriors. Golden State changed up their starting lineup and went small, starting two guards and three small-forwards in Curry, Thompson, Barnes, Iguodala, and Green. Somehow, it worked.

The Cavs took a 7-0 lead early thanks to some hot shooting and size over the Warriors. But it was evident that having Timofey Mozgov defend Andre Iguodala would not be something Cleveland could get away with. Golden State ended the first quarter on a 14-2 run to take a 31-24 lead after one.

The Cavs could not inch within seven points in the second quarter as the Warriors lead grew to as much as 48-33 thanks to a 13-5 run that really put the Cavs in a hole. Surprisingly, the Warriors were able to outrebound the Cavs despite playing small the entire game. They would get within 10 at the end of the half, but Curry hit a late shot to give the Warriors a 54-42 halftime lead.

The crowd and the Cavs came out ready to play in the third as Dellavedova knocked down back-to-back threes to start. That was the beginning of a 12-2 run that got the Cavs within 65-62 with five minutes remaining. The Cavs got the game to a 73-70 deficit, but Stephen Curry hit a three at the end of the third that seemed to suck the life out of the building.

LeBron James started out on the bench in the fourth quarter, and that’s when Golden State made their huge run and essentially put the game out of reach. James, as was the case for the whole game, was held to no fourth quarter points by Iguodala. Every Cavalier player not named Timofey Mozgov struggled mightily offensively, especially J.R. Smith, and could not stop the Warriors defensively as Golden State ran off a 21 point road victory, 103-82.

Timfeoy Mozgov scored 28 points with 10 rebounds. LeBron James had 20 points, 12 rebounds, and eight assists on 7-22 shooting. Tristan Thompson had 12 points and 10 rebounds and Matthew Dellavedova scored 10 points on 3-14 shooting. The Knicks brothers continued to struggle as Iman Shumpert shot 2-9 from the field, including 1-5 from downtown, and J.R. Smith shot 2-12 from the field, including 0-8 from downtown. Smith was a game-worst -27 in just 28 minutes and clearly was not making an impact on either end of the floor.

The Warriors, who have now regained home-court advantage, now look like the favorites to win with Games 5 and 7 at home.

LeBron James catches a pass in the post from Matthew Dellavedova and immediately throws it over his head to Mozgov, who dunks it all by himself.

LeBron James drives baseline, and Andrew Bogut fouls him and sends him flying out of bounds. James’ head hits the baseline cameraman’s camera and starts bleeding.

He dried and wiped his head and was able to remain in the game.

Tristan Thompson comes up with the steal and dishes to Delly to ignite the fastbreak. Delly fakes a pas to Thompson and alley oops it up to LeBron James for the throwdown.