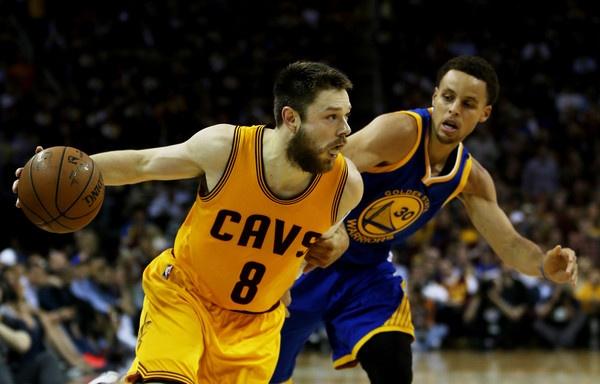 It had been eight long years since the Cleveland Cavaliers organization hosted an NBA Finals game. The time has come for a city hungry for a championship to have a crucial game on their home floor. Game 3 of the NBA Finals between the Cavs and Warriors was definitely an exciting one.

To start the game, the crowd was electric. LeBron drew first blood with a driving layup on the very first possession. The Cavs continued to feed off the crowd’s energy but Golden State stayed close. With a little over three minutes left James Jones nailed a three-pointer while being fouled and converted the 4 point play. JJ and Mike Miller showed off their championship pedigree with some great hustle plays to close out the first quarter. The Cavs would lead 24-20 going into the 2nd.

In the first three minutes of the second quarter JR Smith scored 5 points and appeared to get his stroke back. The Cavs and Warriors fought back and forth playing great defense and making good plays. Shumpert knocked down a big 3 and Golden State answered back with a dunk from David Lee and big buckets from Igoudala. To end the half James Jones caught a bullet pass from LeBron and nailed the 3 pointer. At the half LeBron had 13 points and 9 rebounds, Curry only 3 points on 1-6 shooting, and Andre Igoudala was the Warriors most effective player.

The Cavs came out a bit stagnant in the 2nd half. That didn’t last long, after a Delly floater and 3 pointer, the Cavs lead was extended to 10 and the Warriors called a timeout. But the Cavs were not done there, just a few minutes after the timeout they went on a 12-0 run. Contributions were made from everyone on the floor. The lead was stretched to 20 in the 3rd quarter and the Q was rocking! At the end of the 3rd the Cavs led by 17 with a score of 72-55.

The 4th quarter was a roller coaster ride. Golden State did not stop fighting despite the deficit. The Warriors went on a 13-2 run and cut the lead to 6. They continued to fight and trim the lead down. The Cavs would extend the lead to 5 off a ferocious alley oop by LeBron. But the dubs were not done, Steph Curry began to get hot and nailed a 3 to make it only a 1 point game. Cleveland went on a run of their own and LeBron hit a huge 3 and extended the lead to 7. Then again Curry was hot he hit two 3 pointers in the last 30 seconds. LeBron was great at the free throw line late and iced this game for the Cavs.

Blatt: "Delly's the most Cleveland-like Australian I've ever met in my life. If you're from Cleveland, you know what I'm talking about"

Curry did finish with 27 points despite only having 3 in the first half. Harrison Barnes, Draymond Green, and Andrew Bogut were non factors. Matthew Dellavedova had a terrific performance with 20 points. LeBron James again tallied 40 points. Along with scoring he grabbed 12 rebounds and 8 assists. We are witnessing arguably the greatest performance in NBA Finals history from the King.

The winner of game 3 in the NBA Finals wins the series 84% of the time. There is still a lot of basketball to be played but the Cavs chances are increasing. Game 4 is Thursday at 9 PM and it is sure to be a great one.

LeBron James and Iman Shumpert initiate a pick and roll with Stephen Curry. Curry does a bad job of hedging on the screen, and James drives by the defense for the baseline slam!

James Jones gets the pass from LeBron James, and puts it up right away. He gets hit on the arm by Draymond Green but still hits the shot for the four-point play after the made free-throw.

With 15 seconds left on the clock, LeBron James dribbled upcourt. James Jones had the slower Festus Ezili on him, and ran to the corner as soon as James was in passing position. James hit Jones, who in-turn hit the three over the outstretched arms of Ezili with 0.9 left.

Matthew Dellavedova takes the pass from LeBron James, and drives while taking contact from Stephen Curry. As Curry fouls him, Delly puts it up and banks it in for the foul.