FULL HIGHLIGHTS: Cavs Thrash Warriors In Game 3 With Chance To Even Up Series; 120-90 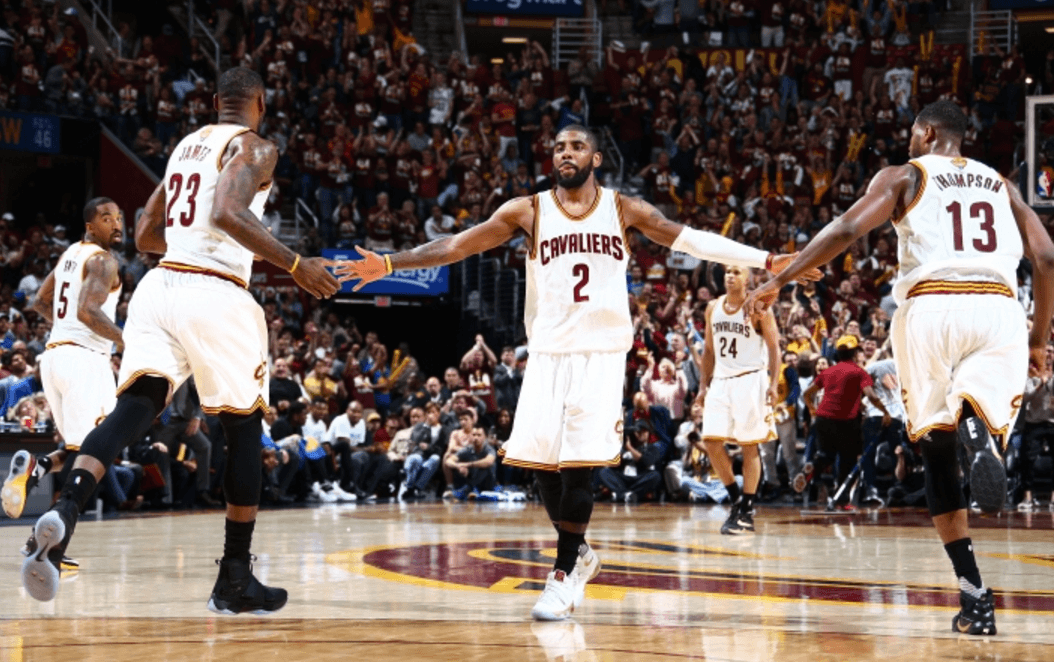 The Cleveland Cavaliers rewarded their incredible home crowd, protecting the Q and taking Game 3 by a score of 120-90. Kevin Love did not play, as he wasn’t cleared of the NBA’s concussion protocol in time for the game. Richard Jefferson replaced him in the starting line-up to great effect, as the Cavs found great rhythm with a smaller and more athletic unit. The Cavs were focused and played very well throughout the night, as their new look starting line-up pushed them to a much needed victory and response.

Kyrie Irving was on fire early, as he lifted the Cavs and the crowd with his relentless scoring. Irving had 16 of the Cavs first 33 points, which equaled the entire Warriors total for the first quarter. LeBron also sensed the moment, and was aggressive early in attacking the rim, putting pressure on the defense. Despite the sizzling start, the most pleasing aspect however, was the Cavs suffocating defense, which allowed them to push the ball and score in transition. J.R. Smith, Richard Jefferson, and Tristan Thompson also stepped up and played big time as well. J.R. was knocking down much needed three-point shots, Jefferson added timely buckets and hustle with his athletic defense, and Thompson completely dominated the paint and offensive glass. Their intensity and effort was extraordinary early, as they opened up a 17 point lead after one, 33-16.

After the initial Cavs flurry, the Warriors steadied themselves and fought their way back into the contest in the second period. With the red hot Irving on the bench to start the second quarter, the Cavs struggled to find their offense. The Warriors made a push, and cut a once 21 point lead to just eight at the break. Even with their offensive struggles, the Cavs continued to play stellar defense, especially on Steph Curry, who only had two points at halftime. Cleveland led 51-43 after two.

The Cavs needed to keep their foot on the gas pedal with their halftime lead, and another offensive explosion to start the third quarter allowed the Cavs to establish separation yet again. The Cavs threw another punch, and the Warriors looked, all but knocked out at the end of the third period. LeBron James was at the heart of the Cavs dominance after the break, as his jump shot came to life and continued to torch the Warriors. They had no answer for the King or the Cavs defense, which continued to create turnovers and easy buckets in transition. A 38 point quarter saw the Cavs up 89-69 after three periods.

Even with a big lead to start the quarter, the Cavs ensured the game was taken care of with another 30+ point outburst in the last period. Up until the middle of the fourth, Kyrie and LeBron had played all but 3 minutes each, and they remained on the floor at the start of the fourth. This ensured the game would be closed out efficiently, and the dynamic duo delivered just that. The one-three pick and roll with James and Irving yielded easy buckets in the final period, as the Cavs emphatically closed the deal in impressive fashion.

The Cavaliers now remain undefeated at home in these playoffs, looking awfully good yet again inside the Q. It was a brilliant and much needed response, which has given them new life in this series. Kevin Love will likely be available for next contest, but the Cavs may have found something in the smaller starting line-up that could help them in this series moving forward.

The Cavs will be looking to tie the series up on Friday, as game four takes place inside the rocking Quicken Loans Arena. 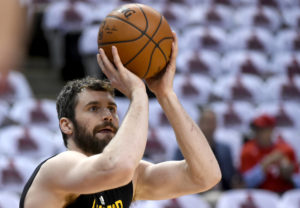 JUST IN: Kevin Love’s True Value To Cavs Will Not Be Dictated By Warriors