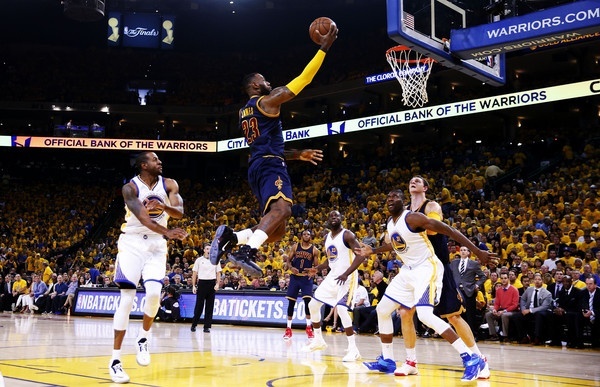 When the Cleveland Cavaliers started the season, they started Kyrie Irving, Dion Waiters, LeBron James, Kevin Love, and Anderson Varejao in the starting lineup. In tonight’s Game 2 of the NBA Finals, only one remained: LeBron James. James helped the Cavs and took them to their first ever NBA Finals victory tonight as Cleveland defeated Golden State 95-93.

The Warriors started out strong out of the gate, especially Klay Thompson. Thompson scored nine quick points on 4-of-5 shooting before getting into early foul trouble. The Cavs had a total team effort to start, but had their largest deficit of the night at 20-12. Golden State clearly controlled the game as they were out and running on the fast break. Cleveland then ran off eight straight points to tie the game at 20 at the end of the first quarter.

Golden State regained the lead at 31-25 early in the second quarter, but Cleveland went on a 15-2 run to take a 40-33 lead. From that point on, both teams exchanged baskets for the rest of the half. Cleveland took a 47-45 lead into the half.

The third quarter was an ugly one on the offensive side for both teams, but both teams also played exceptional defense as Cleveland outscored Golden State 15-14 in the quarter. For the Cavs, LeBron James and Timofey Mozgov scored six apiece while J.R. Smith hit a three to round out the third quarter scoring. A huge play at the end of the quarter however, was the wide-open missed dunk by Marreese Speights that allowed Cleveland to take a 62-59 lead into the fourth quarter.

The fourth quarter started with a terrible J.R. Smith foul on a Klay Thompson three-pointer that went down. Sadly, that was the first of four horrid foul choices by Smith the rest of the game. The Cavs, however, were still able to take a bigger lead as the game progressed thanks in large part to LeBron finding the shooters and the shooters knocking down the open shots. The Cavs took an 11 point lead twice in the game, the last coming with jsut over three minutes remaining. But back came the Warriors behind the Splash Brothers. In less than three minutes, Cleveland’s offense became stagnant and Golden State tied the game. LeBron and the Cavs had the last shot of the game, but the driving layup by James wouldn’t go down. Overtime was upon us again with both teams tied at 87.

In overtime, James found Iman Shumpert for a three and then knocked down two free throws to take a five point lead. After a pair of Draymond Green baskets, Stephen Curry drew the sixth foul on J.R. Smith on a long two-pointer. Curry would knock down both free throws to take a one point lead. For the Cavs, LeBron found James Jones for a corner three, but it wouldn’t go down. The unsung hero of the night in Matthew Dellavedova came to the rescue grabbing the board and drawing the foul on a putback attempt. Delly would known down both clutch free throws with 10 seconds remaining. Delly forced a Curry airball on the other end which was rebounded by LeBron. James knocked down one-of-two and the Warriors turned the ball over with two seconds remaining to seal the Cavalier victory.

LeBron came away with his fifth NBA Finals triple double with 39 points, 16 rebounds, and 11 assists. Mozgov scored 17 points with 11 rebounds, and J.R. Smith scored 13 points on the bench.

Game 3 is Tuesday night and back at the Q with an 8 PM EST start. 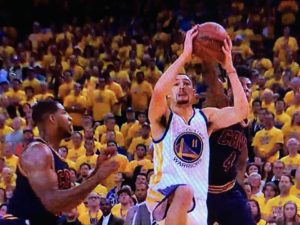