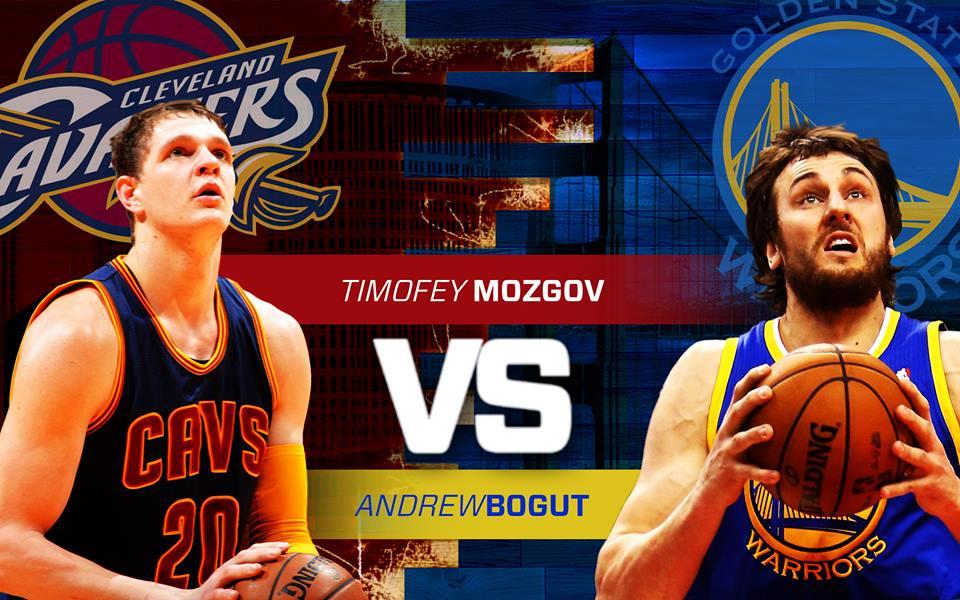 Winning an NBA championship is the ultimate goal for every single team at the start of the playoffs. And if you are fortunate enough and good enough to get to the Finals, you must be effective. Every player on both teams needs to play their best basketball. In this years Finals there are numerous matchups to analyze. Playoff games are won in the trenches, fighting for rebounds and playing good inside defense. Both the Cavs and the Warriors have a good starting center, here is a breakdown of how they matchup against each other.

Andrew Bogut is a veteran center and has been in the playoffs more than once. Bogut is not on the Warriors to score, but is their rim protector and best inside defensive presence. On the Cavs side, Timofey Mosgov is a pretty good all around center. He is not going to score more than 10 points most games but plays good defense and scores quality baskets. Both players are good rim protectors and rebounders. This should be a pretty even matchup in this series given that these guys are very similar players.

In the regular season Timofey averaged two points more than Bogut and shot better at the free throw line. Other than that Andrew has the slight edge in most relevant areas. Bogut grabbed 8.1 rebounds per game compared to Timofey’s 7.8 and averaged a half a block more. Another stat that deserves a look is Bogut’s 56.3% field goal percentage. Mozgov was also very effective shooting 50.4%. It may not seem like much but Bogut shooting such a high percentage shows that although he doesn’t score a lot, he takes good effective shots. In the playoffs Mozgov has improved his scoring while Bogut averages one less point per game. Both have stepped up their defense and average 1.9 blocks. As for field goal percentage Bogut’s has improved in the playoffs at 57.6% and Mozgov’s has dropped to 47.5%.

The two big men have had two head to head matchups this season between the Warriors and Cavs. In the first game in Golden State, neither of the two were in the starting lineup. Bogut played 19 minutes, scored only four points, grabbed five rebounds, and recorded one block. Mozgov played 26 minutes, scored 9 points, pulled down eight rebounds, and also recorded 1 block. The Warriors won the game 112-94 but it is fair to note LeBron James did not play. In their second match in Cleveland both were starters. Andrew played 20 minutes, scoring six points, grabbed five rebounds, and recorded two blocks. Mozgov played 24 minutes, rejected 1 shot, and recorded a double double with 10 points and rebounds. Overall within this small sample size, I’d give Mozgov the advantage in their regular season matchups.

Offensively the edge is given to Mozgov. In the playoffs he averages nearly 4 more points. It is close though because Bogut shoots a much better percentage than Timofey. Mozgov does have a substantial lead in free throw percentage. Timofey is shooting 82.9 percent in the playoffs and Bogut only 33.3. As a big man playing down low, you will be sent to the free throw line a lot during games. It is important to take the free points given to you, especially if you want to win a championship.

Defensively Bogut is the better choice. He can put most of his focus onto this end of the floor because he isn’t feeling pressure to score points behind the talented Golden State offense. Bogut in a smarter more experienced defensive player and a better rim protector. He will get into your head defensively and force you to make uncharacteristic mistakes. I don’t expect Mozgov to be rattled by Bogut too much, he has already had to deal with the notably obnoxious Joakim Noah and he handled that well.

Overall the edge is given to Bogut. He is more experienced, more efficient on offense, and a better defensive player. The margin between these two is not large at all, however. They are similar players with a lot of identical stats. This is a matchup that could go either way. Most of the star power in this series is in the backcourt. That doesn’t mean the defensive big men aren’t as important. In order to win a championship you have to do it as a team, a perfect example was the Spurs last year. This is definitely a matchup to keep your eye on. The way these two players perform will help determine the outcome of the series.