While at the free-throw line in the third quarter of their game against the Memphis Grizzlies on Friday, Thompson randomly slapped the backside of Memphis Grizzlies forward Jae Crowder as he passed by the Cavs big man. Officials quickly ejected Thompson from the contest after the butt tap.

That’s now two Cleveland athletes getting in trouble for slapping some buttocks.

Odell Beckham Jr. did the same this past week following his alma mater LSU’s national championship victory this past week. Only worse, he did it to a police officer.

Footage of the incident went viral all over social media. Beckham Jr. received an arrest warrant from the New Orleans police a couple of days ago for alleged battery.

Thompson’s butt slap was probably just a friendly love tap to his former teammate. However, from the looks of it, it seems like the slap even caught Crowder off guard. And clearly, the officials didn’t believe it as well.

Thompson and Crowder spent half a season together with the Cavs in the 2017-18 season. Crowder arrived in Cleveland in the Kyrie Irving-Isaiah Thomas trade that occurred in the summer of 2017. However, the Cavs eventually dealt the 6-foot-7 wingman to the Utah Jazz at the trade deadline of that same season.

Tristan Thompson has found himself in multiple trade rumors this season. Being a veteran with tons deep playoff experiences under his belt, the 28-year old Canadian certainly has a lot to offer with his ability to rebound the ball and finish at the rim.

Many teams will likely call the Cavaliers regarding the nine-year veteran, whose current deal will expire by this season’s end. 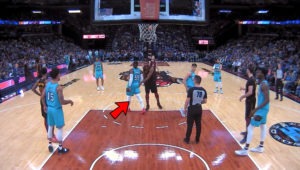