The Cleveland Cavaliers are taking on the Boston Celtics in Game 2 of the Eastern Conference Finals, and after scoring 21 points in the first quarter, LeBron James took a brutal-looking hit from Celtics guard Jayson Tatum and had to exit the game.

LeBron took a legit shot to the jaw from Tatum's shoulder pic.twitter.com/ac0QbGLrL2

UPDATE: James has since returned to the game and finished the first half with 25 points and the Cavs lead 55-48. ESPN’s Doris Burke spoke to Cavs GM Koby Altman in the back and said James’ injury was a neck strain. Cleveland.com/s Joe Vardon confirmed the report via Twitter.

Cavs said it was a neck strain for LeBron

After knocking down just four three-pointers in Game 1, the Cavs already have seven at halftime on 50 percent shooting from beyond. They’re also shooting 51.2 percent from the field. 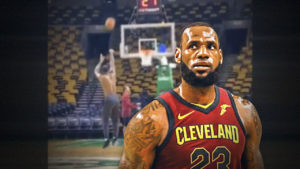