Last Tuesday, LeBron James caused quite a stir when he pulled off a windmill slam during a fastbreak against the Phoenix Suns. It left fans inside Talking Stick Resort Arena in awe as the Cleveland Cavaliers star was still able to complete it at 33 years old and even looked the same as how he did it earlier in his NBA career.

Just two nights after, James once again turned a lot of heads, this time with another jaw-dropping slam versus the Portland Trail Blazers.

After coming off a pick from beyond the arc, the former four-time MVP attacked the basket hard. However, Jusuf Nurkic was ready to defend the rim, but he did not cause James to think twice about his plan, and the Cavs’ alpha dog threw down a vicious tomahawk slam which posterized the Bosnian Beast.

The reaction of the crowd inside Moda Center says it all, as even if James is part of the visiting team, they couldn’t help but applaud him for the move he just made. It only proves further that his athleticism is still at a very high level, and that he is not showing any signs of slowing down anytime soon despite already being in his 15th season in the league.

The Cavs are looking to start a winning streak and a win on the night will give them just that. After the Indiana Pacers’ loss on Thursday, it will be their chance to strengthen their hold on third place in the Eastern Conference and finish the regular season on a hot streak. 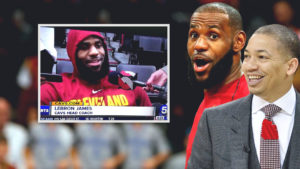