After posting a sub-par performance in Sunday’s Game 1 loss to the Boston Celtics, it looks like Cleveland Cavaliers superstar LeBron James is ready to lock in for Game 2. In fact, James was the first member of the Cavs to arrive at TD Garden Tuesday morning.

As most hoops fans know, the Cavs struggled to find their shooting stroke in Game 1, as they connected on just four of their 26 attempts from beyond the arc. That equates to 15.4 percent. Not good for any three-point shooting team, to be sure.

James logged 36 minutes in Sunday’s 108-83 loss, scoring 15 points on 5-16 shooting from the field (0-5 from downtown), nine assists, seven rebounds and two blocks. Not bad, but not James-like, especially when you throw in his seven turnovers.

With Game 1 in the proverbial rear-view mirror, James seems to be locked in on the task at hand.

LeBron is the only Cav on the court right now for shootaround. I can’t remember a time this year where he’s done this

First one at the arena. Teammates on the way. #WhateverItTakes @cleveland19news pic.twitter.com/AZkzHB0BS1

Believe it or not, James is on the precipice of yet another impressive record. In fact, he has a shot at two milestones in Game 2.

According to a report from Joe Vardon of Cleveland.com, James is just six points shy of becoming the only player in NBA history to record 1,000 points against a single team in the playoffs. As of today, the Kid from Akron has scored 994 points against the Celtics in 35 games.

James, now 33 years of age and in his 15th season, is also just one block shy of passing Elvin Hayes (222) for the 18th spot in postseason history.

Game 2 is set to tip inside TD Garden at 8:30 p.m. EST with ESPN having live broadcast coverage. Let’s see is James and the Cavs can get back on track. 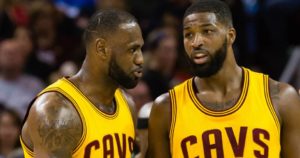