Dwyane Wade calls Dirk Nowitzki ‘definitely one of the greatest’ As the Cleveland Cavaliers are set the face the Dallas Mavericks, it potentially marks one of their final meetings against Dirk Nowitzki. While Nowitzki has not made a decision to play past the 2017-18 NBA season, the 39-year-old is currently in his 20th season with the Mavericks.

During their careers, Nowitzki and Dwyane Wade faced each other in the 2006 and 2011 NBA Finals with each winning one. With Wade entering the final chapters of his career as well, he had the ultimate praise for Nowitzki according to Tim MacMahon of ESPN:

“He’s definitely one of the greatest players in the game.”

While both players will surely appreciate being on the court together, the focus for Wade is how to help the Cavaliers return to their winning ways. Despite improving their depth through the Boston Celtics trade and free agency, they have started the new season with a 5-7 record and are looking to build chemistry as quickly as possible. 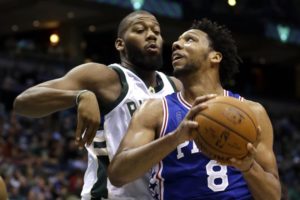