The Cleveland Cavaliers may have lost 112-90 to the San Antonio Spurs earlier Sunday, but the Cavs were very positive even before the matchup began as they dedicated the day to veteran forward Channing Frye who is set to retire after this season.

Aside from making t-shirts for fans dedicated to Frye, the entire Cavs also showed appreciation for the 14-year veteran all game. Frye, who finished with five points, four rebounds and an assists in 16 minutes, received a standing ovation from the home crowd and was tackled by his teammates as he headed to the bench.

Channing Frye got a standing ovation … and got tackled by his @cavs teammates as he exited the game. 😂👏 #BeTheFight | #ThankYouChanning pic.twitter.com/k09SAKL4bY

Channing Frye spent four seasons with the Cavs and was a part of the team that won the 2016 NBA championship. This season, he returned to the team after a brief stint with the Los Angeles Lakers last season. He served as a locker room leader to a young Cleveland team that started to rebuild after LeBron James left the team last summer.

It is unclear if Frye will play in the Cavs’ final home game against the Charlotte Hornets, but if the game against the Spurs was the last time he will suit up for the team, they surely gave him the recognition he deserves.

Frye hasn’t given any hint on what his post-NBA career will be. At the moment, he’s just enjoying his farewell tour with the Cavs. 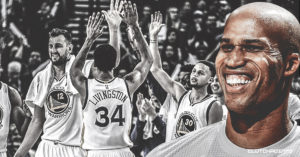 JUST IN: Former Cavs forward Richard Jefferson calls out Warriors for not running it back after 2016 NBA Finals
Related TopicsCavaliersChanning Frye