The Cleveland Cavaliers are off to a 4-1 start to their regular season, but it hasn’t been easy. They haven’t had Kyrie Irving and Iman Shumpert to start, and they lost J.R. Smith to a right knee bruise and quad tendinitis after three games. He was ruled out for three games, and is doubtful to play in Sunday’s game against the Pacers.

Richard Jefferson started in his stead against the Knicks on Wednesday, but Jason Lloyd of the Akron Beacon Journal reports that the Cavs may have a new starter in mind for tonight’s game against the Sixers.

According to Lloyd, a player wearing the red jersey is an indication of his starting position in the game later that day.

This would be Cunningham’s first ever NBA start, and in five games for the Cavs, he’s averaged 4.2 points per game. 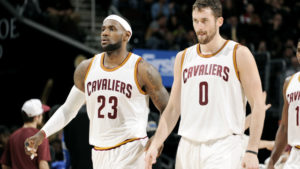