Cavs tried to trade for No. 34 pick to draft Ivan Rabb Last night’s NBA Draft has come and gone. For the most part, the Eastern Conference champion Cleveland Cavaliers were spectators, as they had no picks this year. However, there were a few stirrings behind the scenes.

According to ESPN’s Marc Spears, the Cavs were working on a deal with the Sacramento Kings to trade into having the 34th overall pick. Cleveland was aiming for Ivan Rabb, a 6-foot-10 First-team All-Pac-12 power forward out of the University of California. Spears reports that terms were already agreed to, but for whatever reason, talks began to stall near the deadline.

Cavs thought they had deal for 34th from Kings to draft Cal's Ivan Rabb, source said but it stalled at deadline.Terms were already agreed to

Rabb, a 20-year-old former McDonald’s All-American and Mr. Basketball of California (2015), would have been a fine addition to the Cavs’ front-court rotation. In his four varsity seasons at Bishop O’Dowd High school in Oakland, CA, Rabb amassed over 2,000 points, 1,000 rebounds, and became the winningest player in school history (108-19).

In the end, Rabb was selected by the Memphis Grizzlies with the 35th pick. Now, the mobile forward will be learning post moves from NBA greats Zach Randolph and Marc Gasol. 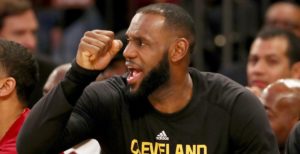