The 2020 NBA Deadline is less than three days away. At 3:00 PM on Thursday, all trades must have been sent to the league office for approval. Chances are that the Cleveland Cavaliers will have made at least one deal by that point, given their roster is full of quality veteran players on expiring contracts. Here is a quick overview of the Cavs players who could find themselves on new teams by next week.

Acquired in the (second) Alec Burks trade last season, Knight played a decent role for the Cavs, as he started 26 of 27 games, averaging 8.5 points, 1.9 rebounds, and 2.3 assists in 22.9 minutes per night. Injuries have hampered him this season (as they have the majority of his career), but even when he’s been active, his role has been significantly decreased. In the 16 games (zero starts) he’s played in 2019-2020, Knight has averaged 4.9 points, 1.3 rebounds, and 1.9 assists in 15.1 minutes. Back in October, there was a hope that Knight could continue his solid play from last season and increase his trade value, but that hasn’t been the case.

He is in the final year of a five-year $70 million contract, and carries a $15.6 million cap hit, which is surely attractive to many teams looking to create cap space for next summer, but that’s all the value that Knight holds on the market. A team could bite just for the financial benefits, but it’s just as likely that the Cavs aren’t able to find a taker and end up buying out Knight instead, or just keeping him for the rest of the season. If Knight does stick in Cleveland, it’s unlikely his role will increase, due to the logjam of guards ahead of him on the depth chart.

Perhaps the least likely player on this list to be dealt, Delly is still on an expiring contract. He has a $9.6 million cap hit this season, and has played in 44 games. He isn’t making much of an offensive impact, averaging 2.7 points in 12.6 minutes, but he also averages 2.7 assists, and plays solid defense.

He may not have a huge on-court role for this team, but it is a role nonetheless. His status as a fan favorite and his veteran presence is much more important than how many points he contributes. The Cavs have more than enough guards on the roster to where Delly’s regression isn’t a big deal.

Dellavedova provides mentorship to the young players on the team and he will always be adored by the fanbase for how he plays the game and for being a member of the 2016 championship team. There is a chance he is used as a trade chip in a salary dump, but there’s a better one he spends the rest of the season, and perhaps the rest of his career, in a wine and gold uniform.

The biggest splash the Cavs can make is trading Love; although at this point things aren’t looking too good. Love is in the first year of his four-year $120 million extension with Cleveland, which is a positive in that he’s under team control through 2022-2023, but also a negative in that he’s owed $30 million per year.

For Minnesota Timberwolves Kevin Love, that’s a good price. For current Love, not so much. He has been healthy this season, and his numbers are up from 2018-2019, but he’s not been as good as expected. He is averaging 17.4 points, 9.8 rebounds, and 2.3 assists in 31.9 minutes per game, while shooting 45% from the field and 38% from beyond the arc. Good numbers, but not great.

There are a few possible reasons for Love’s disappointing play. Perhaps he’s just not as good as he once was, whether that’s due to the injuries he’s dealt with over the past few seasons, or his age (31). Maybe John Beilein’s system isn’t maximizing his skillset. Maybe he’s not being treated as the offensive focal point (his usage rate of 22.7% trails Collin Sexton’s 26.2%, and Sexton takes 3.5 more shots per game than Love). Maybe he’s not giving enough effort (this is obvious on the defensive side). Whatever the case, Love’s trade value isn’t nearly as high as many hoped it would be.

In fact, Love’s trade value doesn’t seem to even be positive. Teams reportedly want Cleveland to part with a first-round pick in order to move Love, which completely defeats the purpose of trading him in the first place. The Cavs aren’t in need of cap space; they’re the team who should demand assets to take on other organizations’ bad contracts.

Unless another thinks Love is worth giving up a pick and/or young player for, Love won’t be moved. The Cavaliers are not going to trade him just to get him out of town. At least, they shouldn’t.

The player with the most trade value on the entire roster is probably Thompson. He’ll be 29 in March, is in the final year of his contract, and is having the best season of his career, averaging career-highs in points (11.9), rebounds (10.4), and assists (2.1). He’s a high-energy and physical player who provides good defense and rebounding. His cap hit of $18.6 million should be extremely attractive to contenders, especially considering it’s attached to a player who can improve their team this postseason.

Since October, there have been conflicting reports about Thompson’s future in Cleveland. Thompson seems to want to stay long-term, but the team has been either been looking to extend him as soon as possible, or wanting to trade him by Thursday.

The original plan was to have Love, Thompson, and other veterans like Jordan Clarkson mentor the young players while keeping the team somewhat competitive, but with how the Cavs have played recently, combined with the reports of the less-than-stellar locker room culture, it may be best to move in a different direction. Thompson is likely to fetch a good return, and that’s best for the team.

Henson makes $9.7 million this year, a solid number for a team to take off its books for next season. Henson, like Knight, has dealt with injuries this season, but has been mostly healthy since early December. He doesn’t pack a ton of offensive punch, but he’s a good rebounder and defender, as evidence by his averages of 3.7 rebounds and 1.1 blocks in 13.4 minutes. Henson can certainly help a team in search of of some more rim protection, which should be every team in the league.

All of these players could be gone in five days, or they could all play the season out in Cleveland. The Cavs could make one trade, or four plus. If there’s one thing this front office has proven to be, it’s unpredictable. It’s safe to assume the Cavaliers will do something by the trade deadline. The question is what? 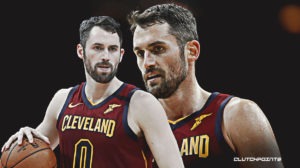