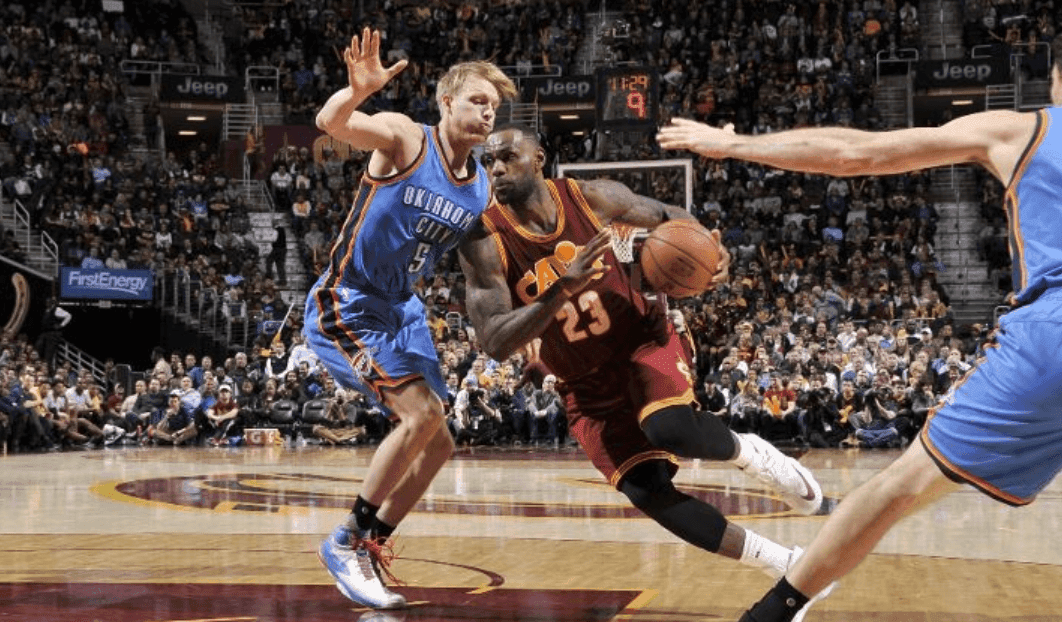 The Cleveland Cavaliers earned a hard-fought win against a streaking Oklahoma City Thunder team tonight, locking down on defense in the fourth quarter of an entertaining game in Cleveland for the 104-100 victory. LeBron James had an outstanding all-around game, ending just one rebound shy of a triple-double with 33 points, 11 assists and 9 boards. The Cavs held the fast-paced Thunder to 100 points, which is 8 shy of their average. Their per game scoring is second in the NBA to only the Golden State Warriors, but the Cavs were able to hold them in check and earn the victory.

The Cavs got off to a strong start on offense, scoring 26 first quarter points, but struggled to keep up with the high scoring duo of Kevin Durant and Russell Westbrook. The dynamic combination combined for 22 of the Thunder’s 28 first quarter points. Durant was hot early, scoring 14 points in the first, but cooled down after that to finish with 25 for the game. The first quarter was a back and forth battle, with neither team able to take a commanding lead. Once the first quarter was over, the game became a game of runs, with either team taking double-digit leads.

The Thunder would make the first run, flying out of the gates in the second quarter on a 12-2 run, pushing the lead to 40-28. Cleveland would fight back in a big way, answering the Thunder run with an 18-0 run of their own. Matthew Dellavedova would spark the run, hitting consecutive 3s and scoring eight points during the streak. The Cavs didn’t score in the final 2:33 of the half, however, and the Thunder ended the half with seven straight points to take a 1-point lead at 47-46 at the half. The defense for the Cavs came to play in the second quarter, holding OKC to just 19 points, even after the early 12-2 run.

In the second half, the Thunder picked up where they left off in the second quarter. They once again built a double-digit lead at 69-58. The Cavs were focused intently on containing Durant and Westbrook, which they did successfully. It was power forward Serge Ibaka, however, who did his best Kevin Love impression by making two 3-point shots and a few other jumpers to lead the Thunder offense in the third. The Cavs answered Ibaka’s hot streak with a mini-run of their own, cutting the lead to just four at the end of the third quarter.

The fourth quarter was where the Cavs ultimately made the run that allowed them to close out the game. Kevin Love and LeBron James got the momentum going to start the final 12 minutes. Love would make a miraculous 4-point play on the first possession of the quarter. He would then throw his patented long outlet pass to LeBron, who finished with a dunk plus another foul and free throw. Just like that the 4-point Thunder lead was turned into a 3-point Cavs lead, which they would hold from then on.

The rest of the fourth quarter was a total team effort on both ends of the floor. Delly and Jared Cunningham made Westbrook work hard for everything he got on offense. Love and Tristan Thompson battled the massive frontline of OKC to control the boards, especially on the offensive end. Richard Jefferson played tough defense on Durant and made timely baskets down the stretch to increase the lead. The Thunder would make a desperate run in the final minutes to cut into the lead, but the damage had already been done and their efforts were proven too little and too late.

LeBron’s gaudy stat line overshadowed huge games by Delly and Tristan Thompson. Both finished with double-doubles – Delly 11 points and 10 assists, and Thompson with 12 points and 15 big time rebounds. Eleven of his rebounds came on the offensive end, effectively demoralizing the Thunder defense.

The Cavs home court advantage is becoming dominant, as they run their record to 11-1 at the Q with tonight’s win. They will try to continue that trend on Sunday, as they fight to avoid a letdown in an afternoon game with the 1-26 Philadelphia 76ers.

LeBron drives down the middle, spins off of his defender and send a behind the back pass to Tristan Thompson for the wide open finish!

LeBron James goes after a loose ball, diving past Ibaka and into the courtside fans sitting by the Cavalier bench. James saved the ball, but barrels through the fan and injures her in the process. The lady was down for a few minutes and the game was eventually halted so she could be taken out on a stretcher.