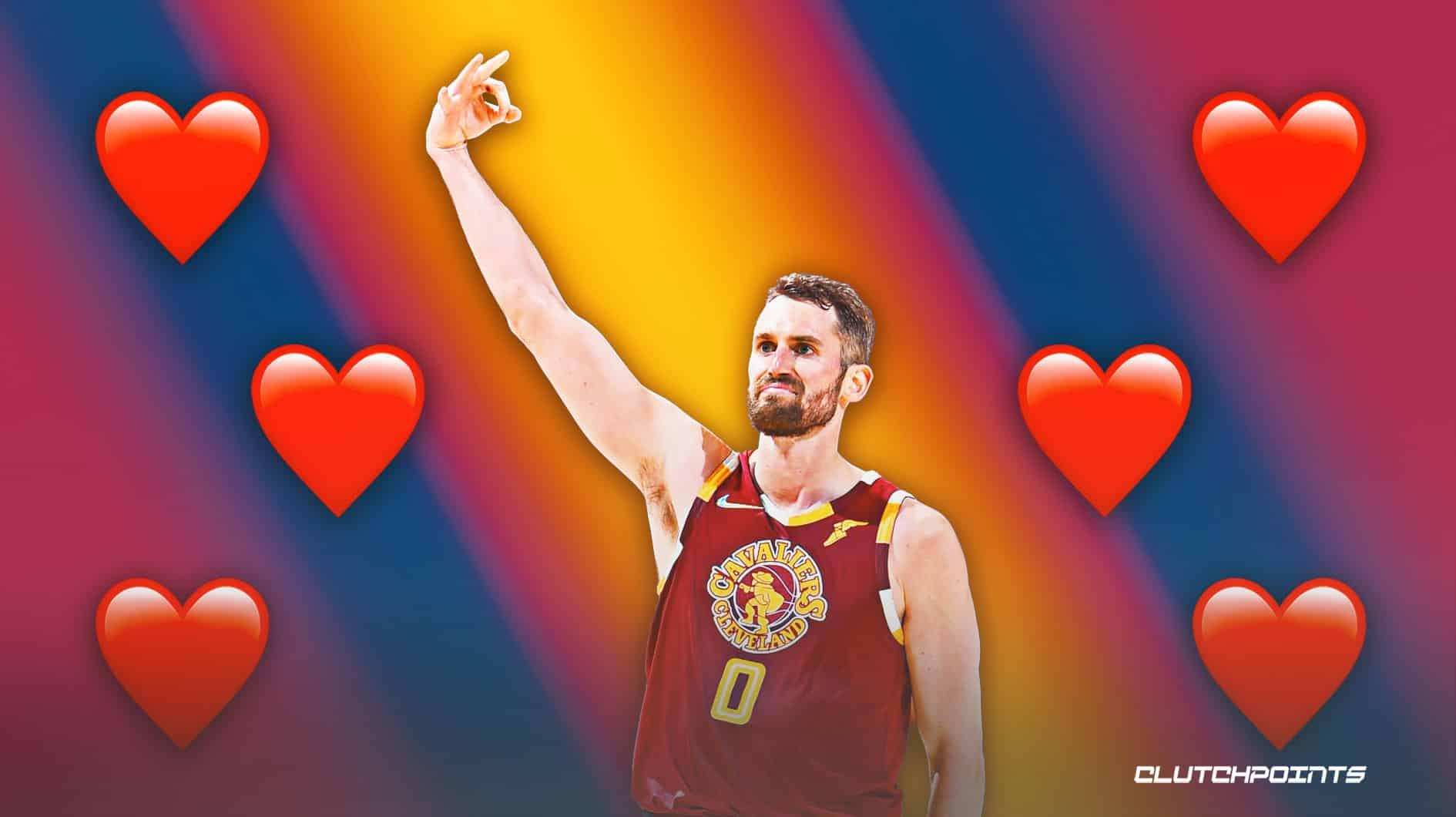 The Cleveland Cavaliers are good again. Not only are they just good again, this is a team that has chemistry. The players clearly enjoy partaking in the game of basketball together. They compete every minute of every game. Poor performances are few and far between, which means the eradication of a Cavs staple: the scapegoat.

Whether it be finding an excuse for lazy, uninspired play or a stretch of blowout losses, every year the team’s struggles seem to get pinned on a few people. In recent years, popular fall guys have been the coaches, Collin Sexton, and Andre Drummond. But we all know who the primary victim always is: Kevin Love.

Ever since he first stepped foot in Cleveland, his name was seemingly on the trade block 24/7. Except for this season, much to Love’s relief. The former Timberwolf has shone this year in a revised role. It wasn’t a smooth journey here. From LeBron James throwing shade at him to multiple injuries to panic attacks to temper tantrums to trade rumors to signing an albatross contract… it’s been rough.

This summer particularly felt like a breaking point. Kevin was elected to be on Team USA’s Olympics squad; however, remarkably disappointing play resulted in him getting removed and replaced from the roster. On his way out, Jerry Colangelo, the managing director of Team USA, had some insulting words to say about it all. Kevin Love took offense to them.

Perhaps this event is what motivated K-Love to silence the haters this year. Maybe it was something else. Regardless, this is a man we’ve never seen before in a Cavaliers jersey. It’s not the best or most talented version of him, but he’s surpassed nearly any and all expectations of him coming into the season.

In the wake of Evan Mobley getting drafted to the Cavs, Love was moved to a bench role. It felt like this was the beginning of the end of his tenure in Cleveland, leading to him assuming a progressively smaller and smaller role. The exact opposite has happened. He’s had a killer season and is a key part of the team’s success this season. How did we get here?

Kevin Love has a newfound fire inside of him

Other than locking down Steph Curry in game 7 of the 2016 NBA Finals, Kevin Love has always been a pretty horrendous defender. He’s not a guy who’s known to exert any extra effort. 2021-22 Love has flipped the those thoughts on their head.

The former top-5 pick has always been athletically challenged in terms of mobility, vertically or horizontally. Physical limitations make it hard to be a good defender, but not impossible. Hammering down positioning and energy can and will make you effective on that end. Love has size, so as long as he can get himself to the right spots, he’ll make the offense work a bit harder.

It is kinda funny that Kevin Love will refuse to close-out on 3-point shooters a little too often, but he’ll take charges from Giannis Antetokounmpo.

But hey, whatever works, I guess. Been a heck of a season for the 33 year old pic.twitter.com/oYOWk60WRZ

He still has moments where he doesn’t care enough to closeout on the open shooter in the corner, but he is among the league leaders in charges drawn, and that’s a testament to the sacrifice and commitment he’s made on the defensive end this year. It doesn’t end on that side of the floor, though. He’s bringing the intensity offensively, too.

He’s running the floor, setting good screens, moving the ball well, and relocating tremendously. During the rebuild years, the sweet-shooting big-man often seemed annoyed by the offensive struggles of the young Cavs and was often disengaged and/or selfish. He’s clearly having fun out there now and is making countless winning plays.

Kevin Love continues to play at a higher effort level than any other point of the post-LeBron era. Just the way he’s been moving with urgency on both sides of the floor speaks volumes. He’s came into this season with a different mentality. pic.twitter.com/fgUcCf6YJl

His jumper has been scorching

Kevin Love’s evolution from a paint beast to a perimeter sniper has been one 0f the most impressive turnarounds in the NBA since he was drafted. He’s still able to mix it up a little inside, but he spends the vast majority of his time floating beyond the 3pt line. Despite being a big, that’s not a bad thing. It’s what works best for him and the team.

Phenomenal shotmaking by Kevin Love in the 4th to carry the Cavs to a victory. Such an insane level of difficulty on these looks, but it doesn’t matter.

He’s having one of the best jump-shooting seasons in NBA history. pic.twitter.com/7oIFuMp3GK

The Cavs play multiple non-threats from deep (Jarrett Allen, Isaac Okoro, Evan Mobley, Lamar Stevens), so having him gun it from range is extraordinarily valuable. Few players in NBA history have ever matched his volume and accuracy from deep this season. Shot contests hardly bother him. He’s just that confident, he could put shots up in a phone booth.

Kevin Love helped propel the Cavs to victory with his own personal Cavalanche midway through the 3rd pic.twitter.com/ofTVabzcyX

Even inside the arc, he takes a lot of jump shots compared to shots at the rim. For any normal player, that likely wouldn’t be a good one. There’s no better way to generate efficient offense than getting all the way to the rim. Kevin’s an anomaly. Long-term, his efficiency may dip and he might begin to hit less of his jumpers. After all, volume jump shooters are prone to extended hot and cold streaks. So far, that hasn’t been the case.

This one took a while. The Cavs’ rebuild was saturated with locker room drama and an apparent divide between the older and younger players. Love was often clearly flustered with the way things were going, despite signing a big extension to stay in town after LeBron left. It’s tough to say what he was like with the team off the camera, but the way he behaved and acted out publicly didn’t give him much of a case.

The most important things as a veteran with a young team is to just be patient and encouraging. Correcting their mistakes is important, but in a subtle, nurturing manner, rather than loud and aggressive. Maybe it’s the positive mood of a winning environment, but he’s gone through a mentality shift. Just take a look at him smiling and pupping up his teammates when he isn’t in the game.

Adding other veteran leaders and a stable head coach beside him has certainly helped, as well. JB Bickerstaff, Ed Davis, and Ricky Rubio (before being traded) were integral in the establishment of the team’s culture this season. And these aren’t just empty words, #0 is backing it up by playing some of the most inspired basketball of his career.

Kevin Love may not win 6th Man of the Year this season, with Tyler Herro having the award all but wrapped up. However, he is sure to be a finalist for it, and rightfully so. He’s been a dynamo for the Cavs off-the-bench. Up until the season began, fans were begging for him to be traded or bought out. He wasn’t. He’s still a Cavalier. Somehow. And the team is so much better off for it.