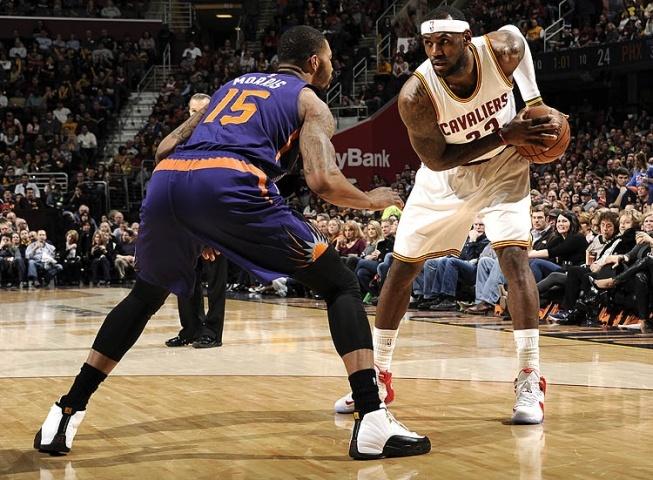 The Cavs bounced back after a loss to the Hawks last night by beating the Suns at the Q tonight, improving their home record to 24-9. The big key to tonight’s win was getting ahead early, and maintaining the lead. With help from a 30 point first quarter, the Cavs went into the half with a 16 point lead at 53-37. But the Cavs didn’t let up, outscoring the Suns 27-15 in the 3rd quarter. An ongoing struggle for the Cavs is their 4th quarter play, and it was apparent tonight as they were outscored 27-9. Despite the 18 point differential, they were able to hold off the Suns for a double digit win at 89-79.

The biggest factor for the Cavs tonight was the power of their big men. Mozgov led the charge, scoring 19 on 6-8 shooting and also added four rebounds. He was also aggressive inside and managed to get to the line eight times, while knocking down seven free throws. A headband-less LeBron was next in points for the Cavs with 17, while also dishing out eight assists and grabbing six boards. Those eight assists tied LeBron with Mark Price for the all-time assists leader in Cavs history with 4,206. K-Love double-doubled again with 13 points and 10 rebounds, while shooting 3-5 from beyond the arc and going perfect from the free throw line 4-4. Tristan Thompson also made his presence known by picking up another double-double with 15 points and 12 boards, eight of which were offensive. He shot 6-9 and went 3-3 from the free throw line. These four helped the Cavs score 40 total points in the paint, compared to the Suns’ 24, as well as grabbing 46 total boards.

The Cavs defense came up big, especially in the first half as they limited the Suns to 37 points. They shut down Phoenix’s shooting, leading to 12-41 field goals (29.3%). They also held the Suns to 4-13 on three-pointers (30.8%). What wasn’t too good about the defense was their 4th quarter performance, as they gave up 27 points. They held the Sun’s top scorer, Markieff Morris to 16 points on 6-15 shooting. They also forced 11 turnovers.

On the opposite end, the Cavs gave up a disappointing 15 turnovers, led by four from LeBron. Fortunately, the offense was hot the first three quarters, and they ultimately finished shooting 31 of 75 (41.3%) and 8-20 from three-point (40%). They also got to the line often and knocked down 19 of 23 free throws (82.6%). A big surprise coming from this game was the split time between Kyrie and Dellavedova, both playing 25 minutes. Kyrie struggled a bit with shooting, going 3-11 and finishing with eight points and three assists. Dellavedova, on the other hand, went 3-7 and finished with 7 points and 2 assists. J.R. Smith added six boards and seven points on 3-12 shooting in 35 minutes.

Overall, the Cavs played a solid three quarters and were able to hold on in the fourth for a win against the 33-31 Phoenix Suns. It was a low scoring game, as the teams combined for 168 points. The Cavs have a short break before going on a 4 game road trip starting in Dallas playing the Mavs on the 10th of March. The Cavs are now 40-25 and move into third place in the Eastern Conference.

J.R. Smith catches the ball in the corner, then takes one dribble and steps back, sending the defending Brandon Knight flying under the basket. Kevin Love’s defender comes to help and Smith dishes to Love for the wide open three-ball.

LeBron James drives to the corner, then gets around Marcus Morris driving down the baseline for the nice finger roll over Morris.

Kyrie Irving recovers the loose ball from Brandon Knight and whips over a baseline pass to Kevin Love in the corner. Love goes behind the back to LeBron, and the King drives to the hoop and finished the play off.