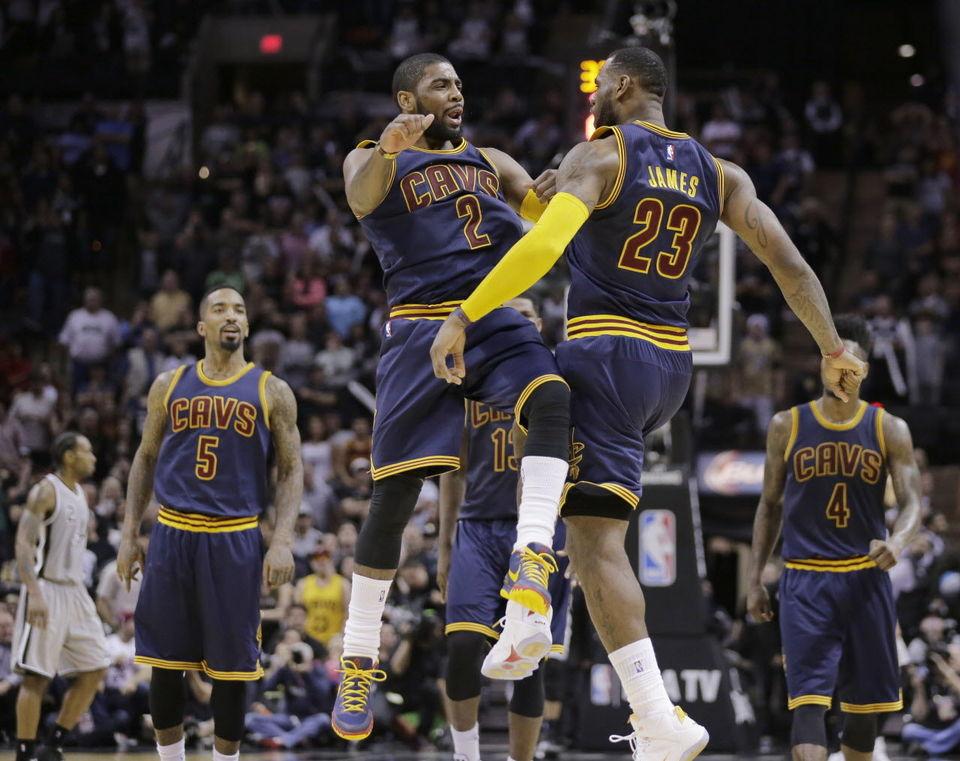 “They’re going to be one hell of a team. I’m glad we played them now,” Spurs head coach Gregg Popovich said after their 92-90 win back in November. “They’ll be a whole lot tougher later on in the year.”

In a game that seemed over once Kawhi Leonard went to the free throw after securing an offensive rebound with a three-point lead in the fourth quarter, took a crazy, unbelievable, breathtaking twist.

Leonard went on to miss both of his free throws, and the rest is one for the Cavs’ record books.

Kyrie Irving hit a game-tying three-pointer to send the game into overtime and ended the game with a Cavaliers’ record 57 points in a 128-125 win against the Spurs.

Irving, who was 20-32 from the field and 7-7 from three, had a game for the record books. Every time Tony Parker challenged Irving, Irving answered back. And that wasn’t the only duel that was going on as LeBron James and Leonard went back-and-forth in the first half. Here’s a look at Kyrie’s shot chart from tonight:

Mesmerizing performance by Kyrie who was absolutely locked in. New career-high 57pts on 20/32 FGAs, 7/7 from 3! @cavspic.twitter.com/F6HcOV1DLs

James, who finished with 31 points, seven assists and five rebounds, was going at the current NBA Finals MVP and wasn’t going to be denied. James was out to prove something as Leonard and the Spurs embarrassed his former team, the Miami Heat, in last year’s finals.

Although it is hard to nitpick one of the best regular season games in recent memory, Kevin Love had himself a game that he should easily forget. Love, who went 2-10 from the field with eight points, was once again absent on the field in the fourth quarter. Love returned early in overtime, but was simply a decoy in Irving’s record-breaking night. Sam Amico talked a little about why Kevin Love was sitting out some of the fourth quarter:

Cavs got 57 from Kyrie and 31 from LeBron. Only 8 from Kevin Love, whose back started acting up. But when those 3 play, Cavs aren't losing.

If the Cavs are going to be playing basketball in late May or early June, they are only going to go as far as Love takes them. It’s a conversional statement, but an accurate one considering how some defenses have played them.

However, that debate is for another night, because tonight’s a night to remember. And if you thought Irving’s 55-point performance against the Portland Trailblazers was something special, think again.

The old cliche of a regular season game having a “playoff atmosphere” is often thrown around as white noise, but if there ever was a game that had that feeling, it was tonight.

The playoffs are only a month away, and if tonight proved anything, Irving is ready.

LeBron James’ first bucket in the AT&T Center is ferocious and merciless, you can tell he’s not messing around tonight after letting the Spurs slip through his fingers last time.

Kyrie Irving tries to get it to LeBron James right off of the pick, but stays patient and gives James a nice bounce pass. James catches and throws it down with two hands!

LeBron hits the clutch three-pointer, hops towards the other end of the floor, and stares down the crowd!