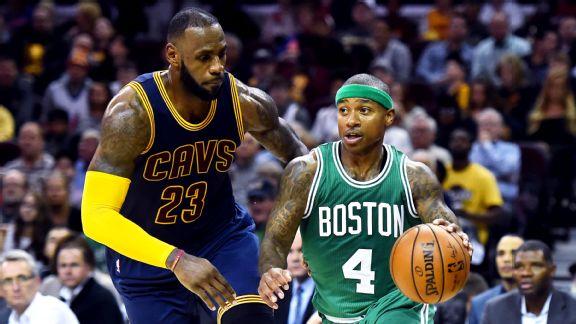 After becoming the first team in NBA history to complete two straight series sweeps in the playoffs two seasons in a row, the Cavaliers have erased many doubts that were crashing their ceiling toward the end of the regular season. Now, waiting nine days before their Eastern Conference opponent arrives in Cleveland, LeBron James and his Cavaliers are preparing for an inevitable bash of backcourts.

On one side is dominating John Wall and complete Bradley Beal, and on the other, an unstoppable Isaiah Thomas with a tenacious Avery Bradley. Both duos pose different personnel but similar matchups. The point guards are difficult to contain, while the shooting guards are lock down shooters and defenders. However, while Washington’s pick and roll game has proven to be lethal for the Cavaliers this season, there could be a silver lining to avoiding Thomas and his Celtics.

In their first round comeback against the Chicago Bulls, Thomas was ridiculed for patterns in his foot work. Coach Hoiberg received a fine from the league for calling out referees for his uncanny evasion of travel violations. Coach Nick from BBallBreakdown took a look at Thomas’ first round to determine if he in fact uses hidden travels to be unguardable.

To be fair, travels present a grey area many people both take advantage of and find frustrating. Today, it seems like a skill to be able to get away it, similar to James Harden’s ability to draw fouls for (at times) unjustified free throws.

Along with the Celtics’ depth and grit, it’s possible the Cavs would be better off if they didn’t have to guard Thomas and his travels. Perhaps taking on the Wizards before thinking about their ultimate goal in June.