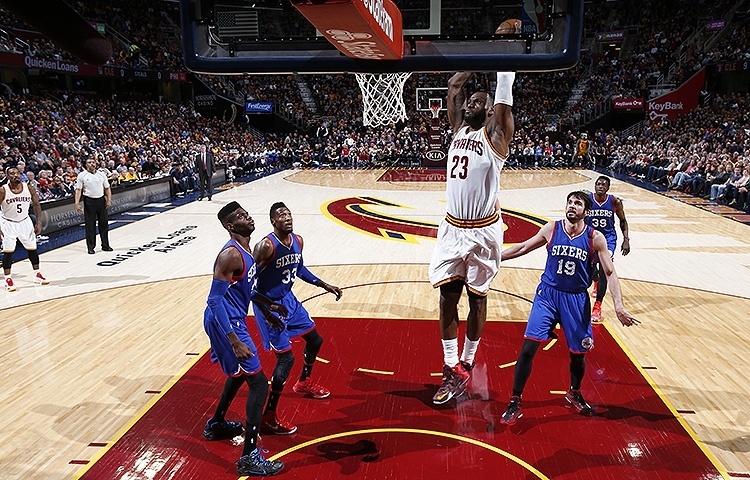 The Cleveland Cavaliers defeated the Philadelphia 76ers Sunday afternoon. Cleveland was able to slip by the Sixers in the final minutes thanks to some incredibly kind bounces and stellar defensive possessions. The victory extended the Cavs’ home winning streak to 16 games, which is the third-longest in franchise history.

The Cavs started out strong, but the Sixers were equally good defensively making the Cavs work for everything. Neither team led by more than four points the entire quarter until the Cavs broke away a little near the end. LeBron had two highlight-reel dunks during a stretch where both teams combined to hit seven straight field goals with only one of them being assisted. Philly used a mini 7-0 run to take a 20-16 run. Cleveland fired back, however, scoring the net 10 points to take a 26-20 lead at the end of the first quarter.

Matthew Dellavedova, Tristan Thompson, and Iman Shumpert provided a huge spark off the Cavalier bench on both sides of the floor. Delly and Thompson connected on a pair of beautiful alley-oops while Shumpert provided in the steals category. The Cavs and Sixers exchanged baskets until Cleveland ran off a 12-3 run to take their largest lead of the game at 51-40 with six straight from Timofey Mozgov. Iman Shumpert surprisingly missed a breakaway dunk with 4:30 remaining in the half. He came down awkwardly and had to leave the game. Cleveland took a 53-45 lead into halftime.

Philly came back in the third with an 11-3 run to tie the game up at 56 apiece. Cleveland would retake the lead on a Kyrie Irving three-pointer, but the Sixers would not go away. Cleveland would keep the lead for the remainder of the third, but Philly wouldn’t fall behind by more than five points as they were making some incredibly tough shots throughout the night. Cleveland led 72-69 at the end of three.

The fourth quarter was a low scoring quarter as both teams combined for 32 points (17 for Philadelphia, 15 for Cleveland). Philly would once again tie the game in the fourth, but Cleveland would respond with a basket every time. The Cavs scored their last points of the quarter with just over four minutes remaining on a Timofey Mozgov put-back dunk. Philly would score their final points on the next possession, which was a Robert Covington three-pointer, his fifth of the night. Cleveland led 87-86 with 3:57 remaining, and neither team was able to score in the final minutes of the game. Kevin Love left the game in the fourth after taking an elbow to his back. The Cavs were able to get to the basket but repeatedly missed open layups while the Sixers had four free-throw opportunities to take the lead, and missed all four of them. The major reason Cleveland wasn’t able to score however was the result of continued isolation plays. LeBron and Kyrie both tried to go one-on-one and were unsuccessful down the stretch. Cleveland defeated Philadelphia 87-86 after Nerlens Noel missed a potential game-winning hook shot in the lane.

LeBron James led the way with 20 points (on 8-24 shooting), 11 rebounds, and six assists. Kyrie Irving had 17 points, three rebounds, and four assists. Timofey Mozgov double-doubled with 14 points and 10 rebounds. Kevin Love also had a double-double with 10 points and 10 rebounds. J.R. Smith scored just nine points on three three-pointers. Iman Shumpert, who left teh game in the first half, finished with nine points and three steals. The Cavs bench combined for just 17 points on the night.

The Cavs now have three days off Monday, Tuesday, and Wednesday before taking on the Miami Heat at home Thursday night in nationally televised game. Cleveland has just three games in the next 11 games and seven in the final 17 days of the season. With Kevin Love and Iman Shumpert banged up, as well as the other Cavalier starters needing rest, these next few days will be important.

Blatt says Love got an elbow to his back that sidelined him and that Shumpert "jammed" his ankle. Didn't seem too concerned longterm on both 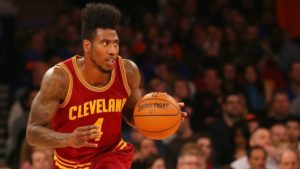 JUST IN: Iman Shumpert (Ankle) Out For Remainder Of 76ers Game