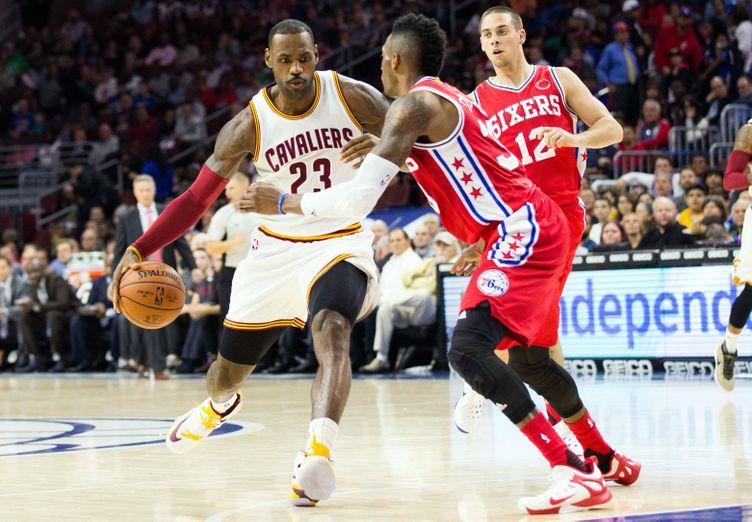 The Cleveland Cavaliers returned to action against the Philadelphia 76ers tonight after two days off and one epic Halloween party. It was a milestone game for LeBron James as he became the youngest player in NBA history to score 25,000 points.

The 76ers crowd showed their appreciation and respect in the third quarter for what he has done after he collected an alley-oop from Matthew Dellavedova to dunk home his 25,000th career point. Fortunately for LeBron and the Cavs, the record came in a road victory.

Philadelphia came out scrappy and pesky, forcing turnovers and tough shots from the Cavs. They closed hard to end the first quarter and took a 32-18 lead into the second. That was about the last of the good news for Philadelphia, as the Cavs would turn it on in the second quarter to cut a once 16-point lead down to five at halftime. LeBron James, Mo Williams, and Kevin Love all played solid in the first half for Cleveland.

Williams is proving himself as a consistent shooter and veteran presence, and Love is playing as confidently as he has since joining the Cavs last offseason. His effectiveness in the post has been making life difficult for opposing defenses, and much easier for his teammates on the offensive end.

The Cavs would continue their energetic play to start the second half. They would go on a 15-2 run that spanned the end of the first half and beginning of the second to take command of the game. The ball was moving, the shots were falling and the defense picked up its intensity throughout the third quarter to take a 10-point lead into the final 12 minutes. The Cavs won this game between the second and third quarters, as they outscored Philadelphia 64-40 in those 24 minutes.

The lead ballooned to 21 at 100-79 before Coach Blatt went to the bench and got all of his starters out. That wouldn’t be the last of the drama, however, as the upstart 76ers never quit regardless of the deficit. The Cavs bench would allow Philadelphia to within six points in the final minute, but a James Jones dagger three from the corner would put the nail in the coffin for a Cavs win. The final score was 107-100, but was no indication of the Cavs’ dominance after a sluggish first quarter. The Cavs are back in action on Wednesday as they travel to New York to take on Carmelo Anthony and the Knicks.

Kevin Love fakes the three, drives, and crosses over before hitting the jumper over Nerlens Noel!

LeBron James gets the steal, dishes to Delly on the wing, who throws it up to LeBron for the alley oop, tomahawk dunk!

LeBron James runs around the perimeter casually before turning the jets on, and getting a lob from Matthew Dellavedova. LeBron collects and dunks it down for his 25,001 career point in the NBA.