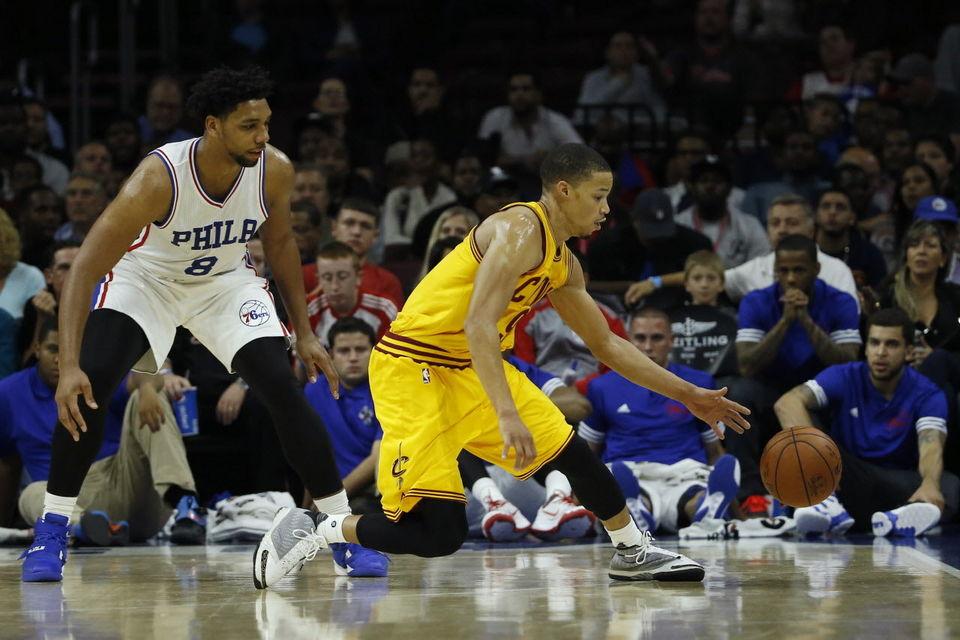 It’s only preseason, but the Cleveland Cavaliers had a tough task of defeating a young Philadelphia 76ers squad in Philly without the services of LeBron James, J.R. Smith, and Timofey Mozgov (all sitting out to rest on the second night of a back-to-back).

The Cavs started with an abstract lineup of Mo Williams, Matthew Dellavedova, James Jones, Richard Jefferson, and Sasha Kaun. This lineup, however, played surprisingly well. The Cavs started off with five quick points, and kept their run going as ball movement led to open shots for everyone. Cleveland took a 22-13 lead after Jared Cunningham came into the game and hit his first field goal (a three pointer). Philly came back with a few baskets, but Anderson Varejao responded with jumpers of his own from everywhere on the floor to help give the Cavs a 31-24 lead.

The Jared Cunningham onslaught continued in the second quarter as he got wherever he wanted on the floor to score. The Cavs second unit (in this game, they were the first unit) was able to keep a hold on the lead and even increased it to 65-54 by halftime.

Within two minutes, the Cavs increased their halftime lead to 71-54. Later in the quarter when they were up 14, the Sixers went on a 20-4 run of their own to get within 75-71 and it looked like we would have a game on our hands. Philly only scored on three free throws for the remaining four minutes, while the Cavs scored 14 of their own to somehow increase their halftime lead to 15 at 89-74. The game looked all but finished, but in the NBA, you have to ride it out until the very end.

The Cavs held the Sixers in check for most of the quarter, leading by 13 (101-88) at the 7:24 mark, by 12 (110-98) at the 3:57 mark, and by seven (114-107) with just 31 seconds remaining in the game. But Philly scored on an and-1 opportunity, forced a turnover by Quinn Cook, and hit a pair of free throws. Then, they forced another turnover by Jared Cunningham, and Scottie Wilbekin’s ONLY basket of the game was a game winning three pointer with just 1.3 remaining. Cleveland called a timeout and didn’t even get a shot off at the other end. A game they lead 89-74 after three quarters was lost after giving up 41 fourth quarter points.

The Cavs next game will be on Monday, October 12 against the Memphis Grizzlies.

The rookie Sasha Kaun started his first game tonight and impressed early on both ends. First he rejects rookie Jahlil Okafor. Then, he comes down and finds Matthew Dellavedova with a beautiful backdoor cut for the layin.

Andy Varejao scores 10 points in the first quarter on 5-7 shooting, mostly on jumpshots:

Jared Cunningham comes off the pick, uses a strong dribble, and elevates for the poster throwdown over the contesting Jeremi Grant.