The NBA seems ready to resume its 2019-2020 season, but the Cleveland Cavaliers will not be a part of it. 22 of the league’s 30 teams are set to take part in a heavily shortened regular-season finish prior to a somewhat normal playoff tournament. Given their  19-46 record at the time of hiatus, the Cavs aren’t in the running for a postseason berth, and the league felt it wiser to not expose the eight worst teams to unnecessary traveling. While the end of the campaign is disappointing for Cleveland, the early exit may be for the best.

This season was going better for the Cavs than 2018-2019. In the team’s first season without LeBron James (for the second time), they finished 19-63, earning the second-highest Draft lottery odds, and finishing with the fourth overall pick. Through 65 games this year, Cleveland had a record of 19-46, while retaining the same lottery odds.

There were quite a few positives to take away from the season, in spite of the Cavs finish in the standings. Point guard Collin Sexton picked up where he left off as a rookie, with his 2019-2020 stats nearly identical to his post-All-Star game improvement in 2018-2019. He averaged 20.8 points and 3.0 assists per game, and was on an absolute tear over the last five games, putting up 30.0 points, 4.6 assists, and 1.8 steals on 58% shooting. His 6.2 potential assists were up from 5.6 as a rookie, although his passing still leaves much to be desired if he’s to play PG full-time. That said, he’s already proven to be a very effective scorer, with plenty of room to grow in the future.

Fourth overall pick Darius Garland had a tough rookie year. In 59 starts, Garland averaged 12.3 points on 40% in addition to 3.9 assists, which paced the team, as did his 7.7 potential assists. On 5.0 three-point attempts, Garland shot 36%. He wasn’t bad, but Garland’s play was not that of a high pick. However, he did not enter the league as a typical top prospect. He was drafted based on his talent and potential, not his collegiate performance. A torn meniscus limited him to just 139 minutes at Vanderbilt.

Garland did show flashes, but for the most part, he was inconsistent, and often timid, deferring to teammates rather than taking initiative. It seemed as if he still didn’t fully trust his knee, and trying to shake off the rust while adjusting to the size and speed of NBA competition was a tall task. He suffered a groin injury that held him out of the final five games of the season and wasn’t making huge progress prior to that.

It’s entirely fair to give Garland a pass for his rookie year, but his presence, nor that of Sexton, should prevent the Cavs from taking a guard like LaMelo Ball or Anthony Edwards if a guard is the most talented player available when the team is on the clock. Until the team finds a surefire franchise cornerstone, they must continue to draft regardless of need or position. If a guard is indeed selected high, that would give Cleveland four young backcourt players (Garland, Sexton, rookie, and Kevin Porter Jr.) who need significant playing time. That’s not the worst problem to have, and the Cavaliers have plenty of time to wait for their young guys to develop.

Speaking of Porter, the team reportedly believes that he is the key to everything, and for good reason. He only recently turned 20 years old, was one of the five most talented prospects in the 2019 class, and despite being incredibly raw, flashed his elite talent quite a few times as a rookie in between injuries. Porter was the final pick of the first round, and if he can come anywhere close to his immense ceiling, this entire rebuild will look completely different.

Aside from the young guard triumvirate, Larry Nance Jr. had his best season, averaging career highs in points (10.1) and three-point percentage (35.2%). His passing, rebounding, versatility, and hustle already made him an invaluable member of the team, and his (slowly, but surely) improving outside shot adds an extra dimension to his game.

The Andre Drummond trade was a big surprise, and while he only suited up for eight games with Cleveland, his impact was widely felt. It’s been a while since the Cavaliers have had an imposing presence in the paint – think back to prime Zydrunas Ilgauskas, or perhaps geriatric Shaquille O’Neal. The Cavs won four of Drummond’s outings, and he should be even better next season as he becomes more familiar with the system; having an athletic big man to run the pick-and-roll with is extremely helpful for a young guard.

Getting to watch a few more games of this interesting collection of players would have been entertaining, but that wasn’t in the cards. Although, head coach J.B. Bickerstaff wants his guys to see the floor, and Cleveland is reportedly considering playing an independent set of games with other teams, such as the Detroit Pistons. But if that doesn’t happen, there are positives to glean from it.

The team as a whole was pretty banged up, with Garland, Porter Jr., Drummond, and others missing time before the season was suspended. There is of course always an injury risk when the team is playing, but when players like Sexton are being relied on even more than normal, the risk is increased. Additionally, having the season paused for this long and then restarting leads to even more potential for injury. Yes, players are keeping in shape on their own, but it’s not the same. Porter Jr. narrowly dodged a bullet earlier in the year, when an ugly knee injury ended up keeping him out for only 10 games, instead of the remainder of the season as initially feared. One of the young guards suffering an injury at this point in the calendar year would have had significant negative effects for next season.

And as much as fans don’t like to discuss it, vying for draft position is a major part of Cleveland’s rebuild. Intentionally losing games isn’t a good thing, but building the team in a way that encourages the development of young players while improving the potential for the addition of more young talent is smart, and that’s what Cleveland has done.

The team owns the second-highest lottery odds, but is just a few games way from falling out of the top-six entirely, which would be devastating. Instead, the Cavs again have the same odds at a top-four selection as the Warriors and Timberwolves and will pick no later than sixth overall. Golden Stated has a 47.9% shot at pick #5, their floor, while Cleveland has a 47.8% chance at not landing a top-four slot. The 2020 class is considered to be relatively weak, but it’s always better to have a higher selection, and the Cavs’ season-ending early locks up those odds. 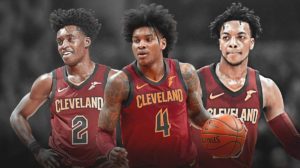