The Cleveland Cavaliers already have two promising young guards on the team in Collin Sexton and Darius Garland. However, it is rumored that LaMelo Ball remains in play for the Cavs whenever the 2020 NBA Draft takes place despite Sexton and Garland’s presence on the roster.

During an interview on 92.3 The Fan, Chris Fedor of Cleveland.com said Ball could end up on the Cavs if the front office in Cleveland gets its way, via Jacob Rude of Lonzo Wire:

Ball played 12 games in the NBL before suffering a foot injury. The youngest Ball brother averaged 17.0 points, 7.4 rebounds, and 6.8 assists per contest.

In the small-ball era, it would be intriguing to watch the Cavs throw out a lineup of Sexton, Garland, and LaMelo. The Cavs are going to have a high pick in the 2020 draft. They had the worst record in the Eastern Conference before the 2019-20 season was suspended due to COVID-19.

The Cavs are in desperate need of young talent at any position. Like Fedor says, the organization doesn’t have the luxury of being picky right now since they had the second-worst record in the NBA before games were suspended. 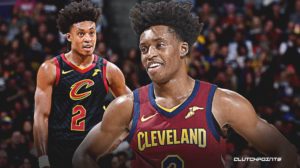