Now that Kyrie Irving is out of Cleveland, a lot of information about his time there has surfaced. He is now the lone ball-dominant point guard on a top team and appears to thrive in this role. Irving apparently felt marginalized at times while playing alongside LeBron James. James is known to be a ball-dominant forward himself, and he has not disappointed his teams nor teammates playing this way.

“Because if we play faster, we get shots off easier.”

“I don’t need to play faster to get my shot off,” Irving replied. “I can do that anytime.”

According to members of the Cavs organization who witnessed the exchange, Lue ended the conversation by walking away, shaking his head.

According to MacMullan, both Lue and Phil Handy, an Irving confidant, confirmed the situation happened but declined to comment further. Irving, for his part, said about the situation:

“At that time, we had probably lost a few [games],” Irving says now. “[Lue] is coming up to me and saying, ‘We’ve got to play faster,’ and I probably wasn’t willing to accept it at the time. So maybe I’d like a do-over on that.”

Irving added that these situations happen often in the NBA. This is just another of them, and it should be left in the past. It is certainly surprising how this story stands out from any other similar one, as it pictures Irving as one of the most selfish players in the league. 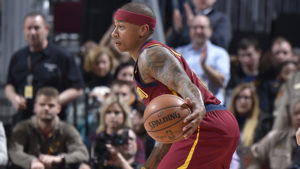