According to Chris Fedor of Cleveland.com, a key member of the Cleveland Cavaliers‘ front office wanted the Cavs to draft Damian Lillard in the 2012 NBA Draft.

However, the Cavs selected Dion Waiters out of Syracuse since they drafted Kyrie Irving in the 2011 NBA Draft:

Back in 2012, there was at least one key member of the front office who loved Damian Lillard. He thought Lillard had star qualities. But the Cavs had just drafted Kyrie Irving one year earlier and were worried about the optics of back-to-back point guards. They were also concerned about a funky fit.

Irving and Waiters were never able to co-exist on the Cavs since they both needed the ball in their hands to be successful.

Cleveland wound up trading Waiters to the Oklahoma City Thunder in January of 2015. That was LeBron James’ first season back with the Cavs after his four-year run with the Miami Heat.

Even though Kyrie and Dame are really good friends off the court, it’s hard to predict if they could have played together. It’s probably better off that Lillard ended up with the Portland Trail Blazers. He most likely wouldn’t have been able to turn into the superstar he is today if he had to share the backcourt with Irving.

And we can say the same thing about Irving. If Kyrie had difficulty playing with LeBron, then his fit with Lillard would have been iffy, too.

The Cavs won the 2016 championship thanks to LeBron and Irving. Lillard, meanwhile, has two of the biggest shots in postseason history under his belt.

Both Irving and Lillard are on Hall of Fame paths. 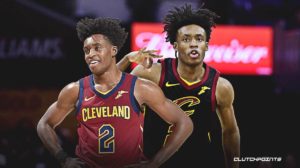