The Cavs have been looking to trade J.R. Smith for a while, as he was “away from the team” for much of this season. No deals came to fruition, and the streaky shooter remained on the roster without playing time. Now, however, the Miami Heat are reportedly interested in Smith’s contract.

Shams Charania shared the news in his recent article for The Athletic:

A team that has expressed an interest in a salary-designed trade of J.R. Smith: the Miami Heat, sources said. The Heat also have contracts they could look to move in the offseason in a deal such as this, and would have to absorb Smith’s deal.

Smith, now 33 years of age, made $14.7 million this season, and $3.8 million of his $15.6 million salary for next season is guaranteed. Under its current construction, Smith’s contract would not allow him to be an unrestricted free agent until 2020.

In total, Smith made 11 appearances with the Cavs this season (four starts), racking up averages of 6.7 points on 34.2 percent shooting from the field (30.8 percent from beyond the arc), 1.9 assists and 1.8 rebounds in 20.2 minutes per outing.

Smith is one of the last remaining vestiges of Cleveland’s championship-winning team in 2016. LeBron James took his talents to the Lakers last summer, and Channing Frye has retired. That leaves Kevin Love, Tristan Thompson and Smith as the lone representatives.

Whether or not the Heat will make a move for Smith remains to be seen, but it sounds like there is a certain level of interest. Perhaps a change of scenery is what’s needed here. 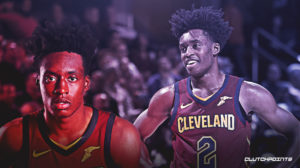 JUST IN: 3 improvements Collin Sexton must make this offseason for the Cavaliers
Related TopicsCavaliersHeatJ.R. Smith