REPORT: Door on Cavs acquiring Kemba Walker might be closed In the last few weeks, there have been rumblings that the Cleveland Cavaliers have some significant interest in acquiring Charlotte Hornets All-Star point guard Kemba Walker.

Much of this has centered around getting additional help on the roster to make it more appealing for LeBron James to stay with the franchise at least through next season. According to Brian Windhorst of ESPN scenario appears to be out the window for the Cavaliers to pursue

@WindhorstESPN on Cavs acquiring Kemba Walker: "I think that door has closed"

This possibility likely became a non-feasible option after the team decided to use the eighth overall pick in this year’s draft on former Alabama guard Collin Sexton instead of making it a part of a deal. The Hornets have made it known over the few months that Walker has become an available asset on the trade market, but haven’t pulled the trigger. Walker is an intriguing option given that he has established himself as one of the better point guards in the league behind a pair of All-Star selections in the last two campaigns.

The lack of consistent success that Charlotte has had with him leading the charge combined with him being in the final year of his four-year, $48 million has put him on the trade market. Cleveland may have had their opportunity to land him, but the team doesn’t possess many feasible deals that Hornet was willing to take on the books next season.

There is no certainty at this point in time that James will return next season, which could make the absence of movement to acquire proven talent like Walker hurt their chances to keep the four-time league MVP. It is still a fluid situation that may see some drastic changes to the roster take place over the next few days in order to help them retain him if he does elect to become a free agent. 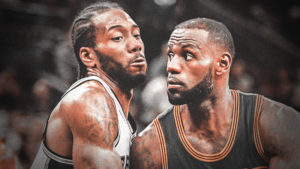