In the last several days, things have heated up on the front with the San Antonio Spurs after All-Star Kawhi Leonard reportedly made it clear that he wants to be moved this offseason. It has put to the forefront the trade chatter around Leonard in the brief time leading up to the 2018 NBA Draft later this month.

Despite all of that noise surrounding the ongoing situation between both sides, former Cleveland Cavaliers general managers voiced on Saturday on SiriusXM NBA Radio that doesn’t believe there is anything for the Spurs to concerned with until Leonard officially tells head coach Gregg Popovich and general manager, R.C. Buford, that he wants out there is nothing to it.

“San Antonio is not into media frenzies. Until the have a conversation with Kawhi Leonard, and he looks coach Popovich and R.C. Buford in the eye and says ‘guys I want out’ none of this means anything. It really doesn’t it. It’s a lot to talk about. It’s a fascinating story. It’s wonderful in some ways that they are not apart of that media frenzy, but what has made them special is that they have ignored the noise for 21 years. They didn’t forget how to do that because there is some scuttlebutt out there. Be really careful to buying into the notion that they have to do something. Those dudes have been phenomenal at not forcing anything until it was absolutely time in their own minds. If something happens relative to the draft, it’s because they heard something directly from him and not what we heard.”

There is plenty of credence in what Griffin is stating given that he has the insight of being a general manager of the Cavaliers for a few seasons. What should also be taken into consideration is that the Spurs have been able to avoid any major situations like this from unfolding in a manner where the team would be forced into a corner of having to trade Leonard.

San Antonio was able to move past a similar situation with All-Star forward LaMarcus Aldridge demanding a trade, but the team was able to work things out with him to get him to not only recommit but also re-signing on a new multi-year extension. The Spurs will likely dig deeper into this matter with Leonard to find out first if things are repairable between both sides before going the route of trading him.

If there is anything to take away is that it is still a fluid situation between both sides that could see much change over the offseason. 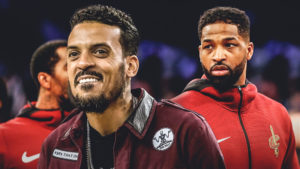